The questions like – where and how did the specific fashion style originate? Who has created the new trend? Who are the followers? Is the direction of fashion movement vertical (upward or downward) or horizontal (lateral expansion)? These are some specific questions, which can be answered through the theories of the fashion movement.

What are the Fashion Movement Theories?

The three major theories of fashion movement are trickle-down, trickle-up, and trickle-across. 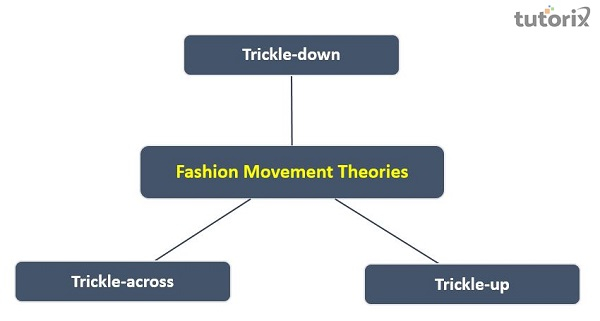 Let’s discuss each one of them separately −

As the name suggests, trickle-down theory explains why fashion moves in a downward direction, i.e., from top to bottom. It is based on traditional adaptation, as clothing fashion designs were traditionally started by the royal and affluent classes, who were socially prominent people. In fact, the elite class were differentiated through their fashion styles, and these styles gradually moved downwards. Likewise, fashion trickled downward from the upper strata to the lower classes, imitated through cheaper versions of design and fabric by the latter.

In the beginning, elite fashion or high fashion is created by fashion and accessory designers who cater to only those people who are known as the fashionable and affluent elite, such as celebrities, powerful business people, leaders, etc. Due to its aspirational value, fashion trickles down and spreads to the lower socio-economic strata.

Also known as the "bubble-up theory," it is the opposite of the trickle-down theory. According to this theory, fashion moves in the reverse direction, i.e., from bottom level to top level. Interestingly, the elite and affluent people and even celebrities imitate the fashion designs originated by lower-status people. Many fashion designers and manufacturers find innovative and creative styles in street style. The best example is street fashion.

Mutilated denim jeans have risen from the streets to the runways of fashion shows. The world-famous fashion designer Gianni Versace took the humble safety pin and transformed it into a bejeweled accessory for his couture show.

Also known as the "mass market theory," the "tickle-across theory" describes the horizontal fashion movement. According to this theory, fashion moves across horizontally across all the social classes, and people of different strata accept or adopt a new fashion design at the same time.

According to trickle-across theory, independent fashion designers and in-house design teams of local and export companies play significant roles, which are supported by manufacturers, retailers, and media, who decide on mass production and marketing styles. In fact, because of the media attention and advertisements, a new fashion design reaches remote people in a short span of time. Furthermore, mass production processes began and were marketed to the local market in remote areas through large fancy shopping malls. This sped up process made it possible for a new fashion style to trickle across for wider acceptance at the same time.

The Trickle-down, Trickle-up, and Trickle-across fashion movement theories describe the mode of fashion diffusion. These theories also explain how and why a fashion design that originated in a small room reaches people who live in a remote location. Depending upon the style, all the three theories have parallel importance as all three are prevalent every time, which means some fashion starts from the top level and reaches to the bottom level; at the same time, some fashion starts from the street and reaches runway fashion; and, some fashion works on a trickle-across concept. Moreover, in the present world, trickle-across is more prevalent.