The Multimode Model of Attention

The person's current needs determine a feature that raises awareness. For example, our eyes cannot see things that are extremely dim or extremely bright. Similarly, our ears cannot distinguish between faint and very loud sounds. We, humans, operate within a limited range of stimulation, and a stimulus must be of sufficient intensity or magnitude to be detected by a neural receptor.

What is The Multimode Model of Attention?

The multimode attention model defines the limitations and the restricted state to which an individual belongs. It was developed by Johnston and Heinz in 1978. It mainly involves the psychology of the specific individual involved within it. The Multimode Model of Attention helps to observe the specific perimeters to which humans belong. The Multimode Model of Attention comprises people's physical and mental barriers. Within the optimal intensity or magnitude of an individual, the level of attention and efforts related while providing Attention are considered, with the help of receiving stimulus. Attention is a cognitive process that enables us to select and focus on relevant stimuli. There are several types, as per the Sohlberg and Mateer concept: arousal, focused, sustained, selective, alternating, and divided. Attention is very selective, as it depends from person to person with changes in time and the changes in a person's perception.

The multimode concept is a concept that proposes that Attention is flexible; the choice of one message over another message can be made at any point during data processing. As per the multimode concept, attention, as a flexible system, selects perceptual messages at any processing stage, whether neural representation, connotation representation, or conscious awareness of the representations. The more processing required to choose a stimulus, the greater the capacity and mental effort required. Changing the basis for selection from physical and connotation features has both costs and benefits. Stimulus data will be attended to through neural analysis, and then as complexity increases, the connotation analysis will compensate for Attention's limited capacity. Shifting from early to late selection concepts reduces the significance of stimuli capturing one's Attention while increasing the breadth of Attention. As per research, connotation selection necessitates more attentional resources than physical selection.

Stages of Multimode Concept of Attraction

As per the evolution done by psychology and witnessed by researchers, it can be stated that Attention, especially the divided or multimode concept, mainly depends upon three stages. The three stages are as follows − 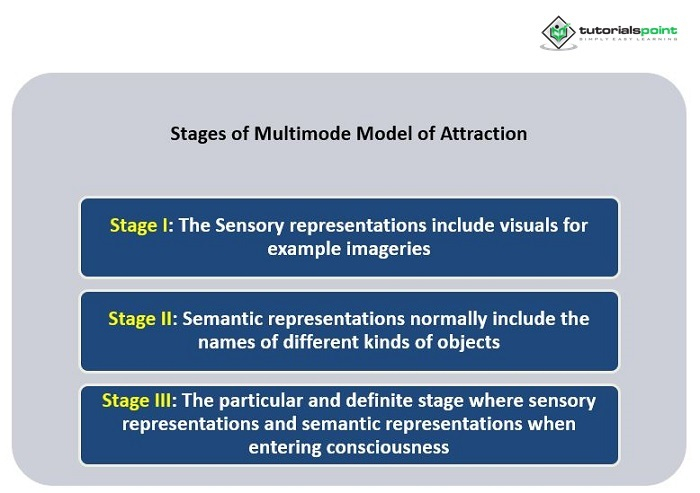 The phrase "sensual attention" draws focus to the fact that our sensor makes its information decisions based on the sensorimotor signal itself instead of the receptive field picture representations at the intermediary production steps in mind. Interoceptive information is encoded in bodily and neural impulses, which are detected and analyzed by neural functions to form our impressions. The second kind refers to how the brain internally represents neural information. When things at different intervals move at different rates, your senses are prompted to pay attention. The movement of faraway objects seems slower than that of nearby ones, and a thing's length may be calculated by its velocity.

Relational representation is the process through which the human mind accepts and stores many forms of names for all locations and names. Coherence describes the state of mind in which we are conscious of our social and physical environment. Feelings of discomfort, desire, thirst, exhaustion, and waking consciousness all qualify as internal stimuli. To show that if intuition can be effectively comprehended in truly representative terms, cognition in whatever context that vague term is used can also be well comprehended in truly representative definitions, a representationalism notion of conscious experience seeks to extend the care of intuition to conscious experience. The Multimode Concept of Focus continues to play an important part in people's mental health. In the wideband theory of attention, neural and cognitive information are treated as a single entity. This idea presupposes that attention may shift between distinct facets of a scene for a deeper understanding. It is up to the individual's present circumstances to decide which aspect serves to bring that circumstance to light.

As the focus of one's focus varies from one person to another based on the passage of time, attentiveness is a highly individual and individual experience. The act of paying Attention is a key component of the learning process. Constant focus, hard work, and intellectual exertion are also required to arrive at a certain judgment. Due to the subjective nature of delivering Attention, the Multimode Concept of Focus addresses its many subcategories, branches, and sections. The multimode notion of focus incorporates both neural and conceptual data to better understand the world around us. This idea depends on Attention being malleable so that various depths of the method for describing are possible. Which characteristic is highlighted depends on the individual's immediate need.