The component garments (jacket, trousers, and waistcoat) follow each other, are made of the same fabric and colour, and are worn together, which is how the term "suit." It got its meaning by "following" from the French suite, which is a derivative of some Late Latin verb sequor, which means "I follow." 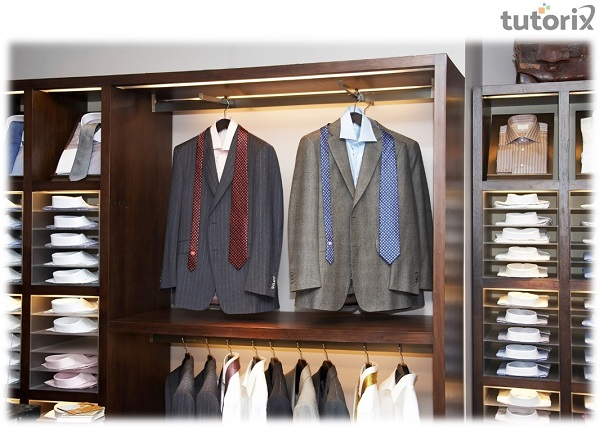 The term "suit" was expanded to refer to a single piece of clothing that covers all or most of the body, since a suit (in this sense) covers the wearer's entire body. Suits are available in a variety of styles and materials. Different cuts and fabrics, either two-or three-piece, single-or double-breasted, as well as accessories, are used. Two-piece suits consist of a jacket and pants, whereas three-piece suits also include a waistcoat. Examples of such clothing include boilersuits, diving suits, and spacesuits.

The origins of the suit can be traced to the streamlined, sartorial code founded by the English king Charles II in the 17th century, following the lead of his former host, King Louis XIV's court at Versailles.  Charles II ruled that men should dress as follows in the English Court: a lengthy coat, a waistcoat (then called a "petticoat"), a cravat (a precursor to the necktie), a wig, knee breeches, such a setup was already in use in Holland, if not Western Europe as a whole, according to the works of Jan Steen, Pieter Bruegel the Elder, as well as other artists of the Dutch Golden Era. The current fashions, which have their roots in the Great Male Renunciation of the late 18th century, markedly altered the ornately embroidered and jewel-encrusted formal attire into the more straightforward clothing of the British Regency period, which later developed into the stern formality of the Victorian era. The modern lounge suit originated in the late 19th century as a result of rules being loosened in an effort to increase comfort.

The choice of a suit's style, accessories, and clothing can all be altered in a wide variety of ways.

A suit's outline is its silhouette. A canvas fitting that is tailored to create a balanced profile eliminates the need for jacket buttons and ensures that clothing is neither excessively tight nor too loose. The neck, chest, and shoulders of a proper garment are structured to provide for wrinkle-free drapery. The fundamental aspect of tailoring is shape. The two primary cuts are single-breasted suits, with the sides overlapping very slightly, and double-breasted suits, which feature a traditional design consisting of two columns of buttons and a wide overlapping of the left and right sides.

Suits can be fashioned from a number of materials, although wool is the most popular. Other materials, such as cashmere, are occasionally used, either alone or in combination with wool. Each of these fabrics has a particular weight and feel. Silk can be used on its own or combined with wool. Despite being less expensive, synthetic textiles like polyester are very rarely suggested by professionals. Black, light grey, dark grey, and blue are the primary four colours for business suits and can be worn with or without patterns.

Two to three buttons are typically found on single-breasted suits; four or more buttons are uncommon. evening coats There are differences in button location and design as well, which is important for the overall image of height the jacket conveys. They often only have one button. More than four buttons are uncommon on suits, though zoot suits, because of their greater length, can have up to six or more.

The lapels of the jacket can be tricked, peaked, shawl-styled, or notched. Each lapel design has a unique meaning and is worn with various suit cuts. The most popular of the three are notched lapels.

Most jackets include two major exterior pockets that are often either patch pockets, flap pockets, or jetted pockets, in addition to a variety of interior pockets. Patch pockets, which have a single additional piece of fabric attached directly towards the front of the jacket, are occasionally seen on warmer-weather linen suits or other casual looks. Standard for side pockets, the flap pocket features an additional lined flap made of complementary fabric that covers the top of the pocket. The most formal pocket is one that has been jetted, with a thin fabric strip sealing the top and bottom of the pocket's slit.

Each cuff on a suit jacket normally has three or four buttons, many of which are just decorative. The formality of the suit determines how many buttons it has; a very casual summer sports jacket may have historically had just one button, whereas tweed suits normally have three and city suits four. Some city suits had two buttons in the 1970s, but today most business suits have four buttons.

Before the 1940s, waistcoats were virtually exclusively worn with suits. Their predominance decreased as a result of restrictions during World War II, but since the 1970s, their popularity has fluctuated. It's common to wear a pocket watch with a waistcoat; the chain's end is inserted through the centre buttonhole.

The fabric used for suit pants is always the same as that used for the jacket. The width of pants has changed significantly over time. Pants of the 1920s had straight legs, wide legs, etc. After 1935, pants started to have a tapered bottom portion. The top of the leg of pants remained broad throughout the 1940s. By the 1950s and 1960s, a slimmer appearance was in vogue. Wide-leg, bell-bottomed, flared, and more conventionally tapered trousers were among the many types of pants that suit manufacturers produced in the 1970s. These fashions were abandoned in the 1980s in favour of tapered, slim-legged pants.

Many people choose to dress professionally for job interviews by wearing suits, which project an impression of respectability. A typical interview suit is conservative in appearance and frequently constructed of blue or grey material. Frequently, interview suits are made of solid-coloured or pinstriped wool or wool-blend fabric. However, the design of an interview suit will rely on the corporate culture of the sector in which a person is looking for work.