A study once concluded that no country, society, or culture exists where people with mental illness and people without mental illness have the same societal value; This statement sums up the stigma around mental health pretty nice. According to Google, stigma (n.) is a mark of "disgrace" associated with a certain "circumstance, quality, or person." There is stigma around many things: Menstruation, sexual activities, AIDS, queer community, caste, and mental health, among many other things. Specifically, concerning mental health, stigmatization is common. Although there is a more open conversation regarding mental health, it mostly centers around certain specific aspects of it. Stereotypes and misconceptions still run amok. For example, one aspect of mental health that is not widely discussed is substance use disorder and addiction.

Addiction stigma can be seen as having "negative attitudes toward those suffering from substance use disorders" that result from the substance use disorder and most likely impact physical, psychological, social, or professional well-being. Stigma is seen as a mark of disgrace. Furthermore, in the context of substance and addiction disorder, it is seen as socially unacceptable and looked down upon. Understanding substance and addiction disorder as a condition requiring medical attention are not widely known/accepted. It is assumed that the person indulging in alcohol or doing drugs can 'stop' taking them; This belief holds for both those suffering and the general population. Moreover, although awareness of substance use's stigma has increased, the stigma itself has remained high.

Present-day health care has knowledge, sources, methods, and tools to deal with addiction and substance disorders. Deaths can be prevented, families can be saved, and relationships can be preserved. However, the stigma around it makes it difficult for them to go out and seek treatment.

In contrast to those who suffer from other mental health diseases like depression, schizophrenia, or other psychiatric disorders, those with substance use disorders are more liable for their conditions. People's perception of substance and addiction disorder as a consequence of an individual's action can influence the value and aptness of public-funded alcohol and drug treatment and rehabilitation. Despite awareness programs, people with addiction are blamed for their condition. The public, including many in the health and judicial framework, continue to see addiction as the consequence of moral weakness and character flaws, even though addiction is now widely acknowledged as a complicated brain disorder with behavioral components. 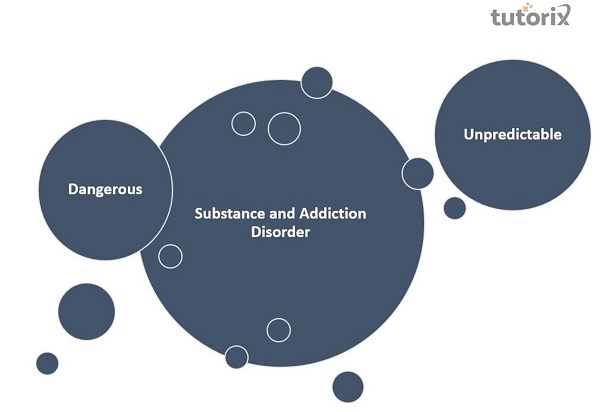 Higher levels of stigmatization of people with mental illnesses in public are linked to stereotypes of violence and unpredictable behavior. Compared to individuals dealing with depression or schizophrenia, individuals with substance and addiction disorders are considered more dangerous and unpredictable. Stereotypes categorizing people with substance and addiction disorders as dangerous can influence public policymaking regarding restricting their rights. Research has concluded that the general population is more likely to have negative feelings towards those dealing with drug addiction disorder than those with other mental illnesses. Researchers have also noted that if someone has had direct contact with those who suffer from mental and substance use disorders and has not experienced any violent acts committed by these individuals, they are less likely to support the stereotype of violence.

The language used to describe instances of substance use significantly impacts the stigmatization that follows, and it not only frames how a condition is viewed by medical practitioners but also by society at large. In instances where a patient is described as a substance abuser, clinical psychologists and doctors have been observed to be inclined to believe that punishment is necessary. However, treatment was suggested when a patient had an official substance use disorder diagnosis. The terms "drug abuse" and "drug abuser" are frequently connected to physical, sexual, or emotional abuse. Due to this, many people are misled into believing that addicts misuse drugs on purpose, whereas in reality, the need often arises from mental compulsions.

Patient reintegration into society and the workforce can be facilitated by regular treatment that helps patients abstain from substance use. People may refrain from seeking necessary medical care if they feel stigmatized in medical facilities or doctor's offices. Maintaining health and high quality of life is correlated with having a reliable primary care physician. There is a huge treatment gap for mental health issues, which includes substance use disorders. It has been estimated that more than half of those with problematic substance use may not be receiving medical treatment. Primary challenges to getting healthcare in India include access, discontinuation of treatment, and affordability.

Drug and alcohol treatment must include counseling for the user's family, who also requires assistance. Evidence suggests that the intimate involvement of families, partners, and caregivers increases the likelihood that therapy will be successful and recovery will last. To successfully recover from drug or alcohol dependence, supportive relationships are essential.

Addiction in the Indian Context

Over the past 30 years, there have been substantial changes in India's substance misuse rates, drug preferences, and age distribution. The number of drug abusers has increased between five and eight times for various drugs, and a third of all abusers are between the ages of 16 and 25.

Minimal research has been conducted on the stigma associated with substance use in Indian society, which has different cultural characteristics and varies greatly across state lines. Negative social support, and fear of treatment, are some factors, and a lack of familial and social acceptance is associated with high levels of perceived stigma in the Indian context. The gap in treatment facilities is enormous, yet there is no data to quantify it. Most drug-control initiatives concentrate on limiting the flow of illicit narcotics, which is insufficient. The emphasis must turn to reduce demand through avoiding dependence and increasing the number of addiction treatment centers.

According to research, stigma produces unique stressors and psychological discomfort, not least because stigma represents a status loss. Additionally, the very act of coping with stigma itself may have unwanted and unanticipated effects, even ones that have nothing to do with the stereotype. For example, the cognitive effort needed to combat the self-esteem loss caused by stigma may lead to a decline in cognitive functioning in other areas. Poor academic performance is just one of the many negative effects of the stigma shown by social psychology research. Stigma has been more closely connected in recent years to poor mental and physical health outcomes, particularly in people who are more likely to experience several forms of stigma, such as African Americans.