Spherical mirrors are commonly used in daily human lives starting from making automobile headlights to torch. The mirror involves two spherical surfaces, convex and concave in order to form a true shepherd. A spherical mirror is commonly made from the cut-outs of spherical surfaces. This type of mirror has a major function in terms of creating images by following a certain formula of reflection and magnification in real-time.

What is Spherical Mirror

Spherical mirrors generally consist of both convex and concave mirrors to reflect images based on the position of the light. 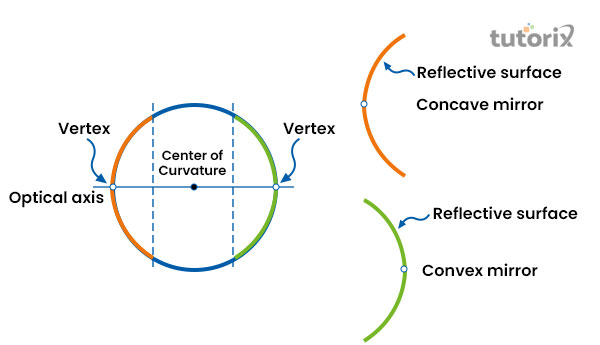 Characteristically, mirrors are symmetrical with a principal axis or optical axis that reflects the optical elements and a vertex in the centre of curvature for the mirror.

In the case of the spherical mirrors, both the inward and the outward surfaces act as reflective surfaces based on the pathway of light (Cnx, 2022). In a spherical lens, the optical axis and the vertex conjugates in the centre of curvature to make things optical for human eyes in real-time.

Based on the way of reflecting images, the spherical mirrors can be categorised into two different parts, the convex mirror and the concave mirror.

Convex mirror is a spherical mirror where the reflective surface of the mirror commonly bulges out towards the source of light. In the case of this mirror, the reflection is directed to the outward side from the focal point. Within a convex mirror the centre of curvature and the focal point cannot be reached at the same time, so it forms a virtual image as a replica of the reflection (Poplavskiy et al. 2020). As a result, the process of image formation cannot be projected inside the mirror. 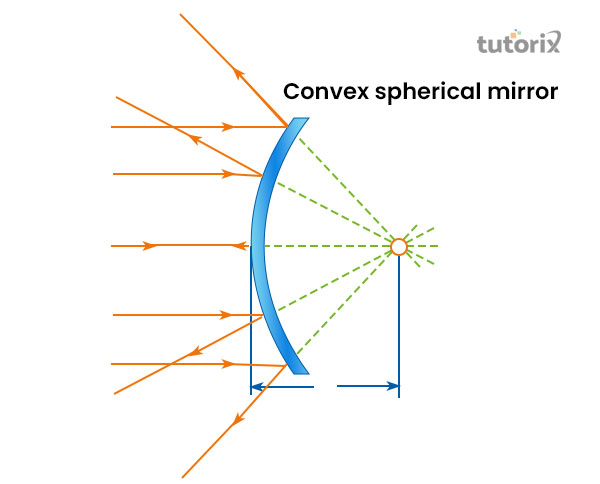 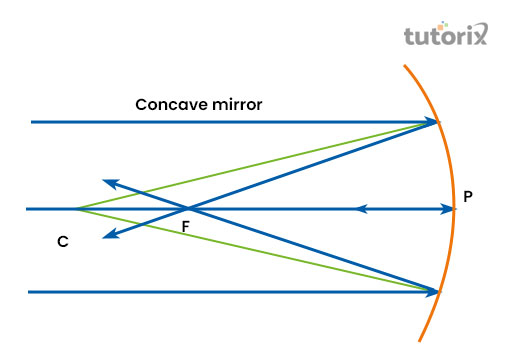 In a concave mirror light generally converges at a certain point whenever it strikes a surface and reflects back from it. The convergence within the mirror earned it the name of converging mirror. Concave mirrors mostly create a magnified, virtual and an erect image when an object is placed at a very close distance from the mirror. On the other hand, when the distance between the object and the mirror is increased, it reduces the image and forms an inverted image in the process (Peda, 2022). This type of mirror is capable of forming both real as well as virtual images under different circumstances.

The formula for Spherical Mirror

Spherical mirrors are generally the cut-outs of mirrors that have curved surfaces painted on both the inward and outward sides of the mirror. Spherical mirrors are segmented between convex lens and concave lens. In a convex mirror light generally flows in the outward direction and makes the image smaller than the actual object from the distance. The images formed in the concave mirrors can be large or small depending on the distance between the mirror and the object. The formula for spherical mirror depends on three factors, the object distance, image distance and focal length where it stands as 1/v + 1/u = 1/f.

Q1. What the diameter of a spherical mirror is called?

The diameter of a spherical mirror is called the aperture. It acts as the reflecting surface of the mirror when light falls on it.

Q2. When a plane mirror can be called a spherical mirror?

Q3. Which rules do the spherical mirrors mostly follow?