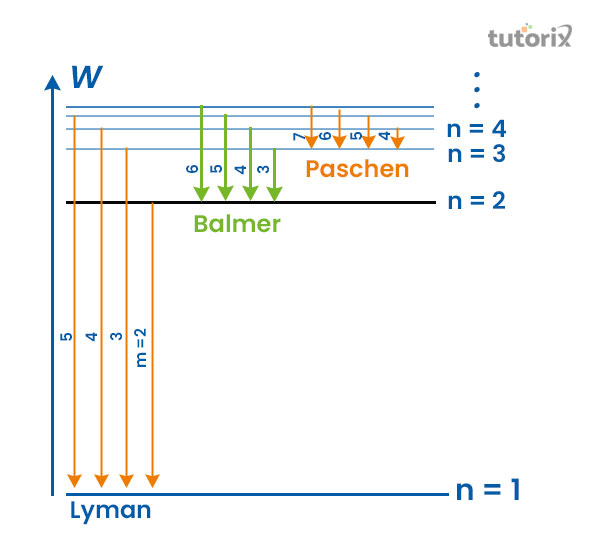 The easiest way of understanding the principle of the spectral series is considered the study of hydrogen atoms. The most basic atomic system found in nature is Hydrogen with one electron and one portion. An image forms whenever the light or radiation enters a device with a slit. This picture can be observed with the help of a spectroscope (Du et al. 2021). The spectral lines, formed by the wavelength of the light, are arranged in a parallel form next to each other with consistent spacing. 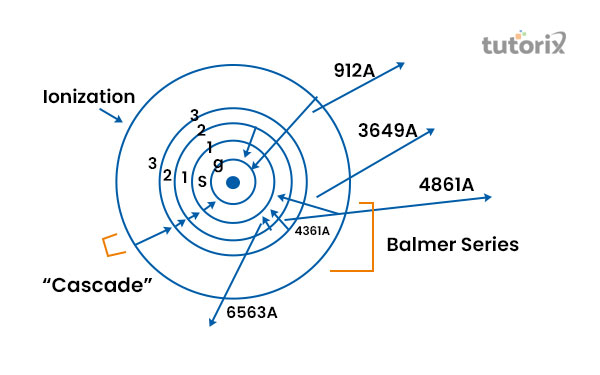 In order to understand the formation of the spectral series, Bohr's atomic model is generally used.

Being applied to the classical electromagnetic theory, this model is used in order to explain the set of energy levels that has been enclosed by each atom (McGuire et al. 2021).

Energy states are generally named on the basis of the quantum numbers. A release of a photon with energy nh – nl is observed in the time when electrons jump to a lower energy state (nl) from a higher energy one (nh).

The production of the same energy phonon is witnessed in time when a transition happens within two energy states that are similar to each other because the associated energy in every state is fixed which helps to divide the spectral series into an equivalent series. 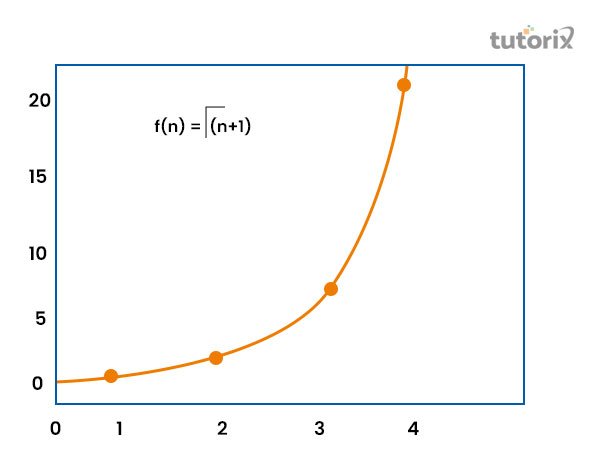 The atomic Hydrogen is considered responsible for putting on the view of The emission spectrum. This specific spectrum is found to be made up of different numerical spectral series.

Once, the energy levels reach the excited state, a transition between energy levels is observed in the electrons of Gas. The wavelength of the spectral series can be calculated by the use of the Rydberg formula (En.universaldenker, 2022).

The difference between energy levels that are observed in Bohr's model and the wavelengths of the spectral lines of the emitted photon is generally represented by the mathematical representation of Rydberg formula.

This particuler series is named after Theodore Lyman as he was the founder of that series. In accordance with Bohr's model, when transitioning of electoral is observed to the level of nl = 1 from higher energy states, the appearance of the Lyman series can be seen (Quimby et al. 2018).

Johann Balmer generally founds this specific series in the year 1885. The occurrence of the Balmer series can be observed in the time of shifting electrons from the energy level that is higher to the lower energy state (nl = 2) that are visible in the spectrum of electron (400nm to 740nm).

The name of series is named after Friedrich Paschen who found this spectrum in the year 1908. At the time of migration of the electrons to the lower energy states (nl = 3) from higher energy levels are considered as Paschen series (Ucolick, 2022). The wavelength of this series is in the infrared range of the electromagnetic spectrum.

Friedrich Sumner Brackett founds this specific series in the year 1922 therefore, this series is named after him. At the time when the electrons are started shifting from a higher energy state towards a lower one, the Brackett series appears.

This series is named after August Harman Pfund and it occurs when the electrons migrate to a lower energy state (nl = 5). The wavelength of this series is in all infrared part of the spectrum that is considered as electromagnetic.

This series is funded by Curtis J Humphreys which occurs when the electrons migrate from a higher energy state to a lower one (nl = 6).

The tutorial has shed light on the representation of the concept of the spectral series that can be observed from different perspectives at different stages of the atom spectrum of hydrogen. In the tutorial, it has been included that in order to calculate the emission of the spectrum, the formula that has the mathematical expression like $\mathrm{\frac{1}{\lambda}=RZ^{2}(\frac{1}{n_1^{2}} −\frac{1}{n_2^{2}})}$ is used. In this formula, the value of R is considered 1.09737 ✕ 107 m⁻¹. Moreover, the tutorial has explained several different types of spectral series.

Photons can be referred to as fundamental subatomic particles that are responsible for carrying electromagnetic force.

Q2. Which atomic system is called the simplest in the universe?

Hydrogen is considered the simplest atom as it consists of one electron and one proton and with that Hydrogen has its presence in three-fourths part of the universe.

Q3. How many spectral lines are observed in the spectrum?