The process of soil erosion occurs either slowly or at an alarming rate. It is the process and by it, the upper layer of soil eras through water or air. Soil erosion has many causes and it affects many ways to the environment. The causes include the heavy rainfall and the logging process. The effects of it are Clogging of Waterways and Destruction of Infrastructure.

Soil erosion is a process through which the top fertile layer of the soil is lost. Soil erosion makes the soil less fertile and the production of crops becomes less (Omafra, 2022). It is seen that the uppermost layer of soil is very light and that is why it is easily carried away by water and winds. The process of removal of topsoil by the natural forces is described as soil erosion.

Agriculture also creates soil erosion problems as the activities of agriculture disturbed the ground. It is seen that soils are grooved for the making of a natural pathway for the water and for ripping new seeds soils are ploughed and it goes to the cause of soil erosion. 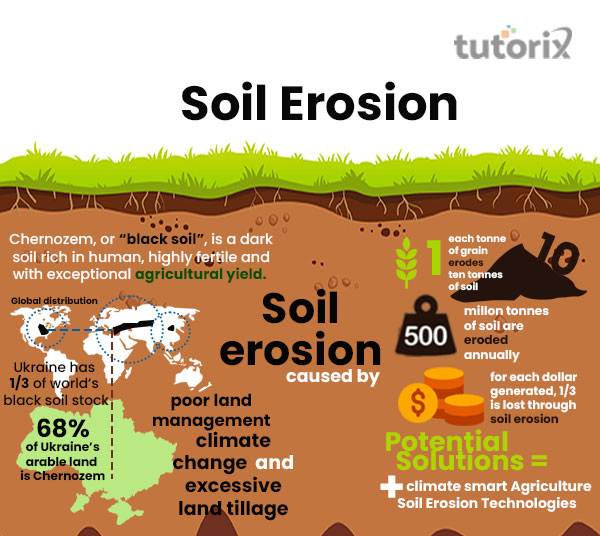 Soil Erosion has a great effect or impact on Earth. The major effects include Clogging of Waterways, Loss of Arable Land, Air Pollution, Destruction of Infrastructure, and Desertification. It is seen that among the effects the agricultural soil contains different chemicals like fertilisers, insecticides, and pesticides (Azolifesciences, 2022).

These chemicals pollute the water bodies where the soil flows. This is the cause and the sediments here accumulate with water and increased water level. That goes to the result of flooding and it is seen that soil erosion also removes the fertile layer that lies on the top of the soil. It is nothing but the loss of arable land as the layer is rich with nutrients that are needed for both the soil and plants.

This soil does not help in the high productivity of crops and leads to low productivity. Air pollution is one of the effects and it is seen that the dust particles merge in the air and it causes air pollution (Alewell et al. 2019).

Soil erosion also leads to Destruction of Infrastructure and because of it, the river banks, as well as the dams, are reducing their efficiency. Soil erosion also creates Desertification as it transforms the habitable regions into deserts. The result also goes to soil degradation, biodiversity loss, and ecosystem alteration.

It is seen that Soil erosion has created a series of environmental issues. That is why it is important to remove all those issues for the healthy living of the living beings. Tree plantation is the best way in preventing soil erosion (Thefactfactor, 2022).

Planting trees on the barren lands will help to limit the erosion of soil. The use of mulch matting can help to reduce soil erosion on the slopes. A series of fibre logs can help to prevent the washes away of soil or water. 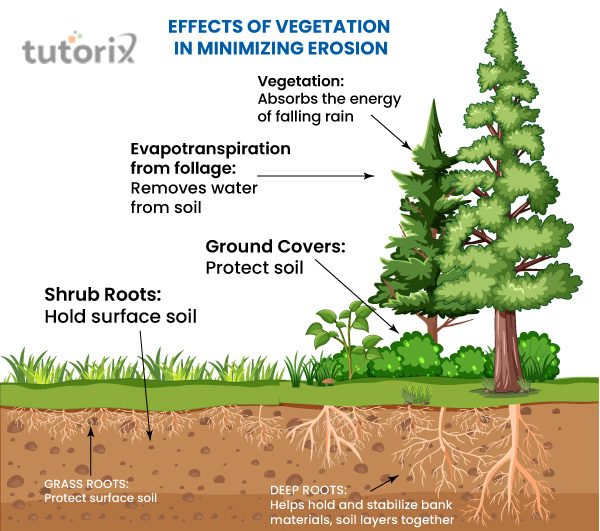 Soil erosion mainly refers to loose of soil particles or washing away of the soils in the oceans, valleys, rivers, as well as streams. There are deficient reasons for soil erosion and they have different effects on Earth. The reasons include heavy rainfall, logging, agriculture, heavy winds and many more. The effects are air pollution, disturbance of infrastructure, loss of fertile land and many more. That is why it is important to make solutions for the prevention of soil erosion.

Q1. How does soil erosion affect the fertility of soil?

Ans: Soil erosion removes the fertile layer of soil that lies on the top of the soil. Thus, soil has become a rocky and hard outer layer and becomes less fertile. The presence of humus becomes and thus affects the fertility of the soil.

Q2. What is meant by topsoil?

Ans: Topsoil is nothing but the upper fertile biologically active layer of the soil. It is rich in organic matter, minerals, and microorganisms. It helps in the fertility of the soil that gives health to the trees.

Q3. How can soil erosion be prevented?

Ans: Soil erosion is one of the major problems related to the environment. It can be prevented through planting more trees on the barren lands, terrace farming and many more ways.