The discipline of psychology is concerned with investigating the human psyche. Personality variations in conduct are examined in psychosocial criminal theory to see what factors may lead someone to break the law. Variances in these areas may be related to people's unique personalities, physiological make-ups, or social networks. Examining the pioneering study of Sigmund Freud reveals the roots of the theoretical approaches to criminal offending. Freud's theory of psychoanalytic development, in which people change with time. Freud concludes that there are three interconnected aspects to every character's character. The id, the ego, as well as the super-ego are all a part of this. The following are the three aspects of a particular subject matter that cause them to act the way they do and define their identities.

Freud's psychodynamic concept, which categorizes people into an id, an ego, and just a super-ego, became the basis for the first research theories on criminal habit. The id was used to define our innate motivations that stem from our biology. The ego refers to the logical and aware part of oneself that acts as a buffer between the irrational impulses of the id as well as the controlling tendencies of the super-ego. The "super-ego" comprises the limits placed on one's actions by one's family out of adoration and devotion and is developed in childhood. The inability to build secure relationships with one's family was a major factor in criminal conduct.

First, there is the supposedly primal id, which feeds our unconscious needs for hunger and sex. The id motivates people to act on their baser instincts, no matter how misguided they may be. When a hungry baby screams, it is the id trying to fulfill its wants. 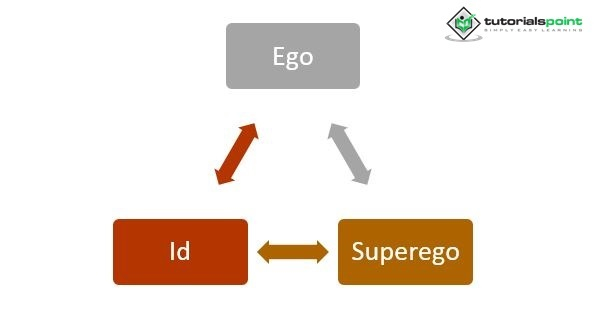 The ego provides the necessary restraint to prevent people from giving in to every id-generated urge. This part makes the idea of real work redirecting inappropriate sexual and violent desires into appropriate ones. The ego is a learned habit. The id, according to Freud, is innate to every person. According to Freud, this id is crucial to the development of one's character; for instance, the id permits a baby to have its wants satisfied via wailing. The id is just concerned with gratifying itself; it will do anything that brings it satisfaction, no matter how negative the circumstance.

The second part of the psyche is the super-ego, where consciousness resides. In Freud's theory, the super-ego comprises a human's ingrained principles and ideals. The id, as well as the ego, combine to form the giant ego. It aids in making one feel good about either a positive action or bad about a negative one. The fourth personality feature is the mind, often called the consciousness, which aids in dealing with the world by mediating between the id and super-ego.

Researchers use many assessments to determine psychopathic tendencies to evaluate the correlation between personality and criminal habits. Inadequate empathy, erratic moods, acting on impulse, and focusing on one's own needs are some indicators of a dysfunctional way of living. A person's lack of empathy for others and indifference to their physical and mental welfare are two hallmarks of anti-social habits. According to the research, repeat offenders have personalities that revolve around attacking people and creating new types of crime. Empirical research has demonstrated that once a person becomes aware of the structure inside their criminal activity, it encourages them to commit crime again.

Individuals with criminal tendencies develop a detachment from their bodies that enables them to commit repeated acts of violence. Similar emotional capability is shown in abnormal as well as dysfunctional character characteristics. The dysfunctional status of the four negative personality characteristics identified by Professor Carl Eysenck's research indicates criminal propensities. First, the individual's inclination toward impulsivity and aggression is acknowledged, often referred to as a psychopathic trait. The second section of Eysenck's study is emotional dysregulation, which leads to poor identity and erratic emotions. The third category includes extroverted personalities with characteristics like dominance, assertiveness, and a thirst for adventure.

The concept of the "Nature versus Nurture debate" refers to the social and environmental variables that have been linked to criminal habits. A person's upbringing, family, and community significantly shape their sense of morality, political philosophy, and prospective character characteristics. These factors shape a person's sense of self and have a pervasive, unconscious emotional effect on their routine actions, worldviews, and propensity to commit a crime. According to studies conducted over the previous eight years, victims of crime are more likely to act violently and aggressively to deal with their trauma or mental trauma. This is often thought to be the outcome of early-life trauma, like sexual or domestic abuse.

Persistent exposure to violent or abusive environments is correlated with habitual problems and character flaws later in life. Criminal habit is influenced by several factors, some of which are just correlative and not causative, such as hostility and violent habit. Adult and child demographics have been studied to see whether there is a correlation between childhood maltreatment and later incarceration. An investigation of 140 female convicts in the highest prisons was reported in 1998. After interviewing each woman, Browne, Bennett, and Maguin found a strong correlation between childhood maltreatment at home and later criminal habits.

According to Freud, a lack of super-ego development occurs when children are raised by uncaring, abusive, or absentee caregivers. Because of this, adolescents with latent criminality was becoming prevalent were unable to benefit from socialization and were instead characterized as pro-government or at least socially awkward. Scientists also acknowledge the importance of extra-family connections and the broader social milieu in shaping the super-ego. An enlarged super-ego has been linked to anxiety and emotions of guilt.