What are semiconductor diodes?

Semiconductor diodes are classified as the does that are composed of various semiconducting materials.

The negatively charged cathodes present in these diodes are accumulated with a vast number of electrons and this cathode is present adjacent to the anode that carries an unrestrained amount of positive charge from the holes.

These semiconductor diodes are formed as a result of a P-N junction and this junction has metallic contact on the extreme ends of it. These metallic contacts at the ends of the junction help in applying external voltage into the diode. These diodes have the intrinsic characteristic of conducting electricity in a particular single direction.

The p-n junction diode and the Zener diode are most prominent forms of semiconductor diodes. The junction that is formed between the cathode and the anode in a particular semiconductor helps in the forming a region of depletion, this region is void of any kind of electrons and holes.

The other type is semiconductor diode reverse bias, in this diode the Negative side of the diode is affixed with the positive terminal of the battery. Electrons from the N end of the battery will move towards the positive end (physics-and-radio-electronics 2022).

In this setup, there is a clog of current since the holes and electrons never meet at a certain junction. Therefore, the majority of the current is unable to flow in the reverse bias.

There are certain significant features associated with the forward bias and reverse bias. In the case of raising the forward bias, a rise of current is observed (etechnog 2022). The current rises to a stable voltage which is also termed knee voltage occurs in a linear manner. After attainment of this voltage, however, the current does not adhere to the linear motion. 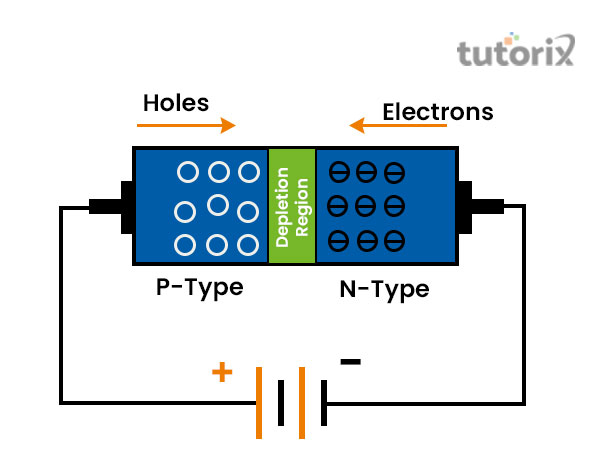 There are multiple applications of semiconductor diode in day-to-day life. These diodes are used in the mixing signals and also control the size of these signals. As opined by Zareian et al. (2018), the light-emitting diode is used for the emission of a spectrum of infrared light.

Photodiode as used a photo detectors. According to Riza Putra et al. (2021), rectifier diodes are used for better efficiency of alternating current. The diodes are also used for the isolation of signals from the whole supply. Zener diodes are used in stabilizing current and voltage in electric systems.

Q1. What materials are used for making a semiconductor diode?

Q2. What are the different kinds of semiconductor diodes?

Ans: There are multiple kinds of semiconductor diodes. Most prominent of them are rectifier diode, Zener diode, Light-emitting diode, Peltier and Thermal diode and point contact. Besides this, there are various other kinds of diodes.

Q3. What are the most prominent applications of semiconductor diodes?

Q4. What is the use of Zener diode and Gunn diode?

Ans: Zener diode is used for stabilizing the current and voltage coursing through various types of electrical equipment. The Gunn diodes are also used in electronic devices of high frequency.