S waves are one of the main parts of the elastic waves. S wave is known as transverse waves. It means the direction of the particle motion of a particular. The waves generally move through the ground. S waves are unable to move through the water. S wave may propagate through some liquid solution that has a high viscosity.

The name SD wave generally derives from the name a certain fact that these are the second types of a wave which can be detected through the earthquake seismograph. After the P wave, S wave generates because the S wave travels slowly on the solid ground. Unlike p wave, s wave cannot travel through the motel outer core of the earth.

S waves and its explanation

Generally, S waves generate during the time of explosion, earthquake, or some energetic source and they propagate within earth or along its surface. Earthquakes generally produce four main types of elastic waves. One of them travels through the earth and the other two travels from the surface of earth. The first one is called bodily waves and the second wave is called surface waves (Pan et al. 2020). Seismographs generally record the frequency and amplitude of the seismic waves and give information on the surface structure of the earth. During the seismic surveys, seismic waves which are artificially generated are used to collect data in gas and oil engineering and prospecting.

On the surface of each, the speed the S wave can be carried from time to time. Generally, the specific speed of the S waves increases from 3.4 km to 7.2 km per second. According to Favorskaya (2018), s waves generally travel by maintaining a curved path. S wave generally refers to the transverse wave the oscillations of the particles of s waves are vertical to direction of wave propagation. Shear force is mainly responsible for the main restoration force. Thus, the propagation of the S waves is unable to travel within the liquids with zero or low viscosity. It is sometimes found that propagation can take place within a liquid medium with a high viscosity. 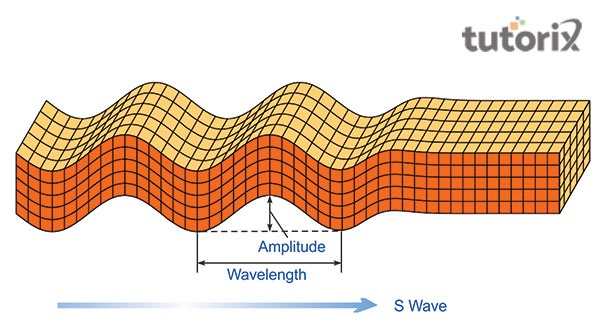 The damage and shaking of an earthquake are produced by three major types of waves. The p wave is the first wave that produces when the earthquake happens. After that, another wave called S wave generates and thus it is called the secondary wave. Thus wave is slower that travels through the body of the rock. Rocks sideways are divided by the S waves at right angles toward the direction of travel (Sedaghati, Pezeshk & Nazemi, 2018).

If a particular liquid is split twisted or sideways, it will not be able to spring back. Thus, S waves are not able to spread in liquid parts of earth like lakes or oceans.

The characteristic features of S waves

The original speed of the S waves generally depends on the elastic properties and density of soils and rocks through which the waves pass. S waves generally travel 1.7 times slower than P waves (Vershinin, Javkhlan & Saidmukaram, 2019). S waves would not beagle to go through the liquid medium such as molten rock, water.

S waves generally hit the surface of the earth after P waves and thus it is named as secondary waves. S waves generally stir the ground in a crosswise and shearing motion which is vertical toward the direction of travel.

S waves are either refracted or reflected at interfaces between the types of rock present. In addition to both refraction and reflection, seismic waves are concerted in other forms. 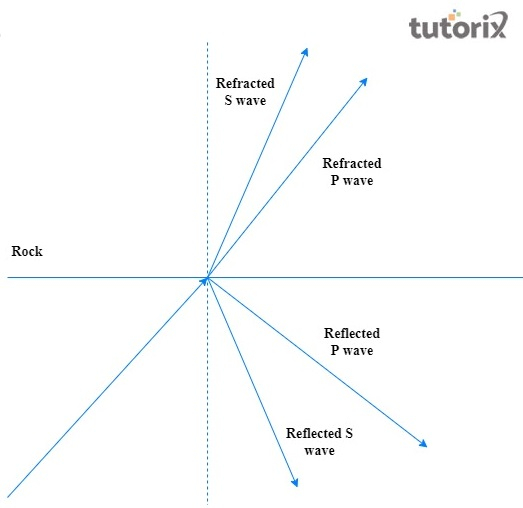 From the figure, S-waves are reported to travel in an upward direction and strike at the bottom layer of varied rock types. S-wave upon striking the surface its energy is passed through the upper layer in the form of S-wave while the other part is converted into P-wave. This is referred to as S to P conversion. Part of energy is often reflected in toward direction as P and S waves. The study of the s wave is very important as gives a clear idea about the layered interior. It is one4 of the essential thing to collect the data and information about the inner surface of the earth. It also plays an important role to anticipate a tsunami or earthquake in advance. The information that can be collected from S waves further helps to resist the natural disaster. Through the correct evaluation of S waves, it is possible to gather more information about the inner condition of earth.

S waves denote the types of waves that occur during an earthquake. Another name of S waves is secondary waves. S waves run much slower than p waves. After examining the trajectory of the S waves within layers of earth, scientists explored that the outer core of the earth is liquid.

Q1. What is the formula of S waves?

Q2. What are the main characteristics of S Waves?

Q3. How the speed of the S waves can be calculated?

Ans. In order to calculate the speed that indicates the splitting of shear modulus with the density of a material. Then square root of the ratio. Mathematically it is $\mathrm{V_s\:= \:\sqrt{(G / \rho)}}$

Q4. What is the velocity of S wave?

Ans. Velocity of S wave is 4.55 km/s. Low-velocity layer in upper mantle occurs within the speed of 140 km deep (approximately). It has its thickness bear about 55 to 62 km.