Structure-description theories and spectator concepts are the two most prominent frameworks for item identification developed in human psychology. Architectural characterization theory maintains that it is sufficient to recognize an item by just looking at its boundaries. As opposed to this, the spectator approach proposes that all of an entity's features are remembered, even though they are not crucial to its identification.

What is Recognition by Components Theory?

Irving Biederman developed the recognition by Contents Concept (RBC) in 1987 to explain the item identification process. The identification by elements hypothesis states that to comprehend anything, one must break it down into its constituent parts or geons. If you are familiar with Biederman's identification by strategically oriented, you will know that geons are flat or three-dimensional shapes that stand in for the entity's simplest parts. Different-shaped geons, such as cylindrical and cones. It could be combined in different ways to make an infinite variety of things. Based on the notion of item identification by its constituent parts, the items that everyone encounters every day are composed of less than 35 representations.

There are some processes by which an item or part is recognized. These stages are thought to be arranged in a cascade. An early edge extraction stage is receptive to distinction in surface features such as luminance, texture, or color and provides a line drawing the explanation of the item. The positioning of the parts is similar to a portrayal in memory, and it is presumed that the matching occurs in parallel, with unlimited capacity. This stage model has been presented to give an overall theoretical context. When a photo of an item is painted on the retina, the recognition by part model presumes it is a representation of the segmented image. Each segmented area is then approximated by one of a possible set of simple parts called geons that generalized cones can model. The basic perceptual assumption of recognition by part is that the parts can be distinct based on perceptual properties in two-dimensional images that are readily detectable. Thus, recognition by parts provides a principled account of the relation between the classic phenomena of perceptual organization and pattern recognition. 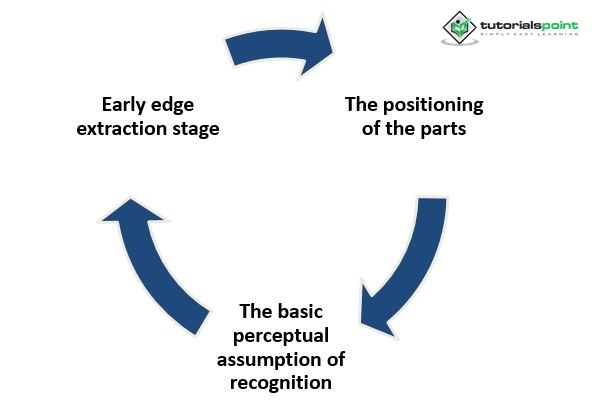 The previous account is mainly based on edge. The surface features like color, brightness, and texture typically have only secondary roles in original access. This should be explained as something other than suggesting that the recognition of the features of the surface intrinsically is delayed relative to the perception of the parts. However, in most cases, the surface features are generally less efficient tracks for accessing the division of a counted item. For example, a chair has a specific color and texture concurrently with its partial explanation, but this is only the volumetric explanation that gives efficient access to the mental representation of a chair.

Relations among the Parts

Dissimilar positioning of similar parts can readily lead to distinctive items. The identical situation between primitives and their arrangements is present in the phonemic representation of words, where a given part of phonemes can be rearranged to make different words. The representation of items would be a structural description that expresses the relations among the parts. These relations include the specification of the relative sizes of the parts, their orientation, and the locus of their attachment.

Evidence of the Experiment

Strengths and Weaknesses of the Theory

According to the preceding explanation, Irving Biederman established the Theory of recognition by parts in 1987, which indicates that a human may grasp goods by breaking them down into geons. The processing phases, color, texture, the relationship between parts, and the strengths and drawbacks of the recognition by part hypothesis have all been examined. The recognition by part hypothesis is useful since it allows us to grasp things independently of the viewing angle. This is also known as perspective invariance. The invariant edge features of geons are responsible for this phenomenon.