Finding answers to difficulties that arise in daily life is referred to as problem−solving in psychology. These issues typically have context- or situation−specific solutions. Issue discovery and problem shaping, where the problem is identified and streamlined, are the first steps in the process. The following phase is to come up with and assess potential solutions. Finally, a solution is decided upon and will be tested. Problems have a solution that must be attained, and how you get there depends on your problem−solving coping mechanisms and analytical methods as well as your problem orientation. 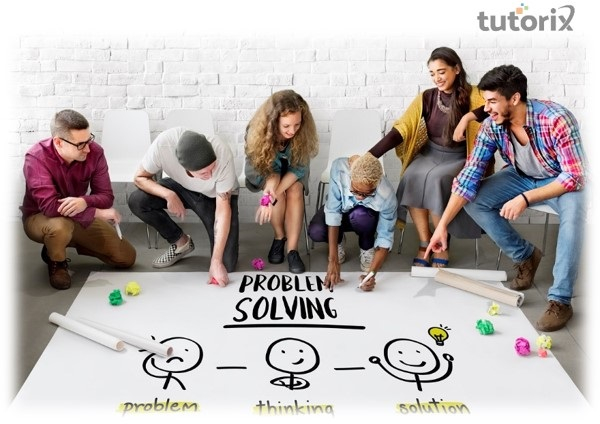 What is Problem Solving?

Solving problems is a common aspect of most undertakings since it involves overcoming hurdles in order to accomplish a goal. From straightforward domestic difficulties, like how to switch on an appliance, to intricate problems in the commercial and technical worlds, there are many problems that need to be solved in our day−to−day life.

When it comes to problem-solving, solutions need enough tools and information to get the job done. Undefined and well-defined issues fall into two distinct categories, and each is dealt with using a different strategy. Unlike poorly defined issues, which lack clear end objectives and expected solutions, well-defined problems do. More early planning is possible with well-defined problems than with poorly-defined ones. Sometimes dealing with pragmatics, or how context affects meaning, and semantics, or how the problem is interpreted, is necessary to solve a problem. The secret to fixing an issue is being able to see what the objective of the situation is and what guidelines may be used. Sometimes solving the issue calls for using abstract reasoning or coming up with a unique solution.

Most of the time, experts like lawyers, surgeons, and consultants tackle problems that require technical expertise and knowledge beyond what is generally acceptable. The more pervasive and uncomfortable the problem, the greater the possibility of building a scalable solution. This is how many organizations have discovered lucrative markets. Engineering, business, health, math, computer science, philosophy, and social organization are a few of the numerous specialized problem-solving strategies and methodologies.

Psychology and cognitive sciences investigate how people think through, analyze, and solve issues. In addition, a lot of studies have been done on the psychological barriers that inhibit people from solving problems− Confirmation bias, mental set, and functional fixity are obstacles to problem-solving. The "problem-solving cycle" is a series of actions for overcoming challenges in accomplishing a goal.

Common processes in this cycle include identifying the issue, defining it, coming up with a plan of attack, gathering the information and materials at hand, tracking the development, and assessing the efficacy of the solution. After an issue is solved, another one typically surfaces, and the cycle repeats.

Insight is the spontaneous 'aha' solution to a dilemma or the emergence of a new notion to clarify a difficult circumstance. The answers obtained via insight are frequently more precise than those obtained through a step−by−step study. The ability to choose effective actions at various phases of the problem-solving cycle is necessary for a speedy solution process. There is no agreed-upon definition of an insight issue, unlike the formal definition of a moving problem provided by Newell and Simon.

A plan of action adopted to find a solution is known as a problem-solving strategy. Different strategies are accompanied by various action plans, and the trial-and-error method is one popular way, for instance. 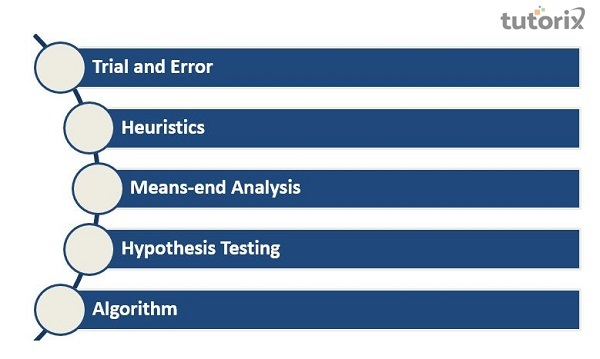 Algorithm − An algorithm is a different kind of approach. An algorithm is a method for solving problems that gives you detailed directions on how to get the desired result. It may be compared to a recipe with very specific directions that always provide the same outcome. We regularly employ algorithms in daily life, particularly in computer science. Search engines like Google utilize algorithms to determine which items will come first in your list of results when you conduct an Internet search. Facebook also utilizes algorithms to choose which content to show in your newsfeed.

Heuristic − A heuristic is a different kind of approach to resolving issues. A heuristic is a generic framework for problem-solving, unlike an algorithm, which must be followed precisely to obtain the desired outcome. These might be viewed as problem-solving techniques that exploit mental shortcuts. A heuristic is what you may call a "rule of thumb." Such a rule spares the decision-maker time and effort, but despite its time-saving benefits, it is not necessarily the most effective way to reach a logical conclusion. Different heuristics are employed in various contexts, but the inclination to employ a heuristic arises when one of the five requirements is satisfied.

Hypothesis testing − A technique used in experiments called hypothesis testing involves making an assumption about what would occur in response to manipulating an independent variable, then analysing the consequences of the manipulation and comparing them to the initial hypothesis.

Means-end Analysis − Choosing and examining a course of action through a succession of smaller stages to achieve a goal is known as a means−ends analysis. The Tower of Hanoi paradigm may be used as a means-end analysis example.

Brainstorming − Brainstorming is the process of gathering and evaluating many potential ideas, particularly among a group of individuals, in order to integrate and refine them until an ideal answer is found.

There are several approaches to problem−solving. Common techniques include heuristics, algorithms, and trial−and−error. A huge, complex challenge is frequently broken down into smaller phases that may be completed independently and lead to an overall solution. A conceptual set, functional fixedness, and numerous biases that might impair decision−making are obstacles to problem−solving.