Leticia is a 67-year-old ex-farmer who lives in solitary with her dog. Her husband died five years ago. Recently, she tripped over her dog and fell slightly, landing on her right hand and inflicting wrist pain (about three months ago). She visited her primary care physician for help with her wrist but also mentioned recent balance issues and a slight hand tremor. The neurologist assigned her a diagnosis. She was referred to physiotherapy to complete a fall risk assessment, maintain her functional status, and address her worries regarding the condition. The question is, what might the diagnosis be? 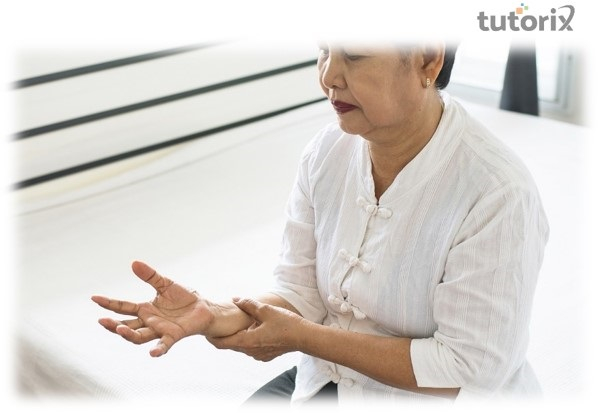 Parkinson's disease is a chronic condition affecting the neurological system and the physical components under the nervous system's control. Symptoms emerge gradually. The initial sign could be a slight tremble in only one hand. Although tremors are typical, the disease might make you stiff or move more slowly. The face may be expressionless in the initial phases, with speech becoming slurred or dull. As it advances over time, the symptoms get worse. Even though there is no cure for Parkinson's, medicines may greatly reduce symptoms. On rare occasions, doctors may advise surgery to control specific brain areas and alleviate symptoms.

Each person will experience the signs and symptoms of Parkinson's disease differently, and early symptoms could be negligible and overlooked. Nevertheless, after signs begin to impact the legs on both sides, symptoms frequently start solely on a single side of the physique and typically continue to be severe. Parkinson's symptoms and indicators include − 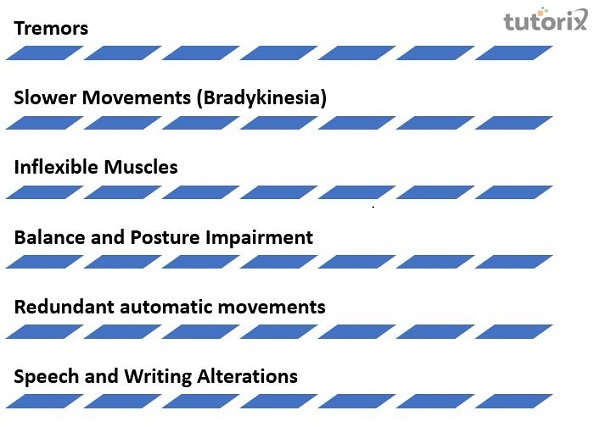 Certain brain nerve cells (neurons) eventually deteriorate or die in Parkinson's disease. A decrease of neurons that generate the chemical messenger dopamine in your brain is the cause of many symptoms. Dopamine deficiency results in abnormal brain activity, which worsens movement impairment and other Parkinson's disease symptoms. Although there is no known cause for Parkinson's disease, several factors, including −

Environmental Triggers − Parkinson's disease may develop later if exposed to specific poisons or environmental factors, although the risk is quite low. Researchers have also discovered that persons with Parkinson's disease experience several alterations in their brains, which is unclear why these changes occur. These modifications include −

These additional issues, which are frequently present in patients with Parkinson's disease and may be treatable − Parkinson's disease is diagnosed by a neurologist, a medical professional trained to treat disorders of the nervous system, based on the medical record, an analysis of the clinical indicators, and a physical and neurological evaluation.

A dopamine transporter (DAT) scan is a particular single-photon emission computed tomography (SPECT) test that the doctor could advise. Symptoms and a neurological exam ultimately determine the accurate diagnosis. To rule out other disorders that could be the source of symptoms, the healthcare provider may request lab testing, such as blood tests. Imaging tests, like MRIs, brain ultrasounds, and PET scans, can also be done to help strike out other conditions.

The doctor may also prescribe the Parkinson's disease drug carbidopa-levodopa (Rytary, Sinemet, among others) and examination. Small amounts for a day or two are not trustworthy; a large dose must be received to demonstrate the advantage. The Parkinson's disease diagnosis will be confirmed if there is a significant improvement while using this medication.

Although there is no known cure for Parkinson's, drugs can frequently significantly reduce the symptoms. Surgery could be suggested in special cases with more severe conditions. Additionally, the doctor could advise adjusting to the way of life, including regular aerobic activity. Physical therapy that emphasizes equilibrium and flexibility is crucial in some circumstances. A speech-language pathologist can assist in addressing speech issues.

We may be able to manage our walking, mobility, and tremor issues with medication. These drugs boost dopamine levels or act as a dopamine replacement. Dopamine levels in the brain are low in those with Parkinson's disease. Dopamine, however, cannot be administered directly since it cannot penetrate the brain.

After starting Parkinson's disease medication, symptoms may noticeably improve. Nevertheless, as time passes, the advantages of medications typically fade or stop being as reliable. Usually, there is still good control over symptoms. The doctor might prescribe carbidopa-levodopa, inhaled carbidopa-levodopa, carbidopa-levodopa infusion, dopamine agonists, MAO B inhibitors, etc. Alternatively, surgery options such as deep-brain stimulation are available for severe cases.

While Parkinson's disease sounds debilitating and reduces an individual to a vegetative state, it usually cannot be anticipated. While numerous researchers are being undertaken to combat the ailments of this disease, it is rather saddening to acknowledge such a diagnosis knowing it will worsen over time and there is no sure-shot miracle cure. Therefore, the best people can do is support such individuals and provide a safe social environment that accepts and appreciates them individual despite their condition.