An ambidextrous gamekeeper, age 56, lost his way in the wooded paths while beating his birds toward a line of gunfire. He knew these paths like the back of his hand and had never before been lost. One week later, a similar experience happened again, but this time it was accompanied by Palinopsia and a headache. The barley grain he had been dispersing earlier to feed the birds was visible everywhere he turned. It took roughly five minutes to complete the entire show. Up to his admission for an investigation six weeks later, he had not observed any additional symptoms and was in good health.

Palinopsia is a general term that refers to several visual symptoms with many etiologies. It is the persistence or repetition of visual images after the stimulus has been eliminated. Palinopsia, for instance, could be a side effect of a medicine or the presenting sign of a potentially fatal posterior cortical lesion. There is uncertainty surrounding the nosology of Palinopsia and similar terminologies like akinetopsia, illusory visual spread, and cerebral polyopia due to the heterogeneous set of symptoms' inability to be reliably defined as either visual illusions or visual hallucinations.

Although Palinopsia shares some similarities with diplopia, polyopia, and physiologic afterimage creation, it is a separate condition that frequently suggests disease due to its unique signs and symptoms.

The following are the palinopsia symptoms that are most frequently noticed −

Based on its symptoms, it can be categorized into − 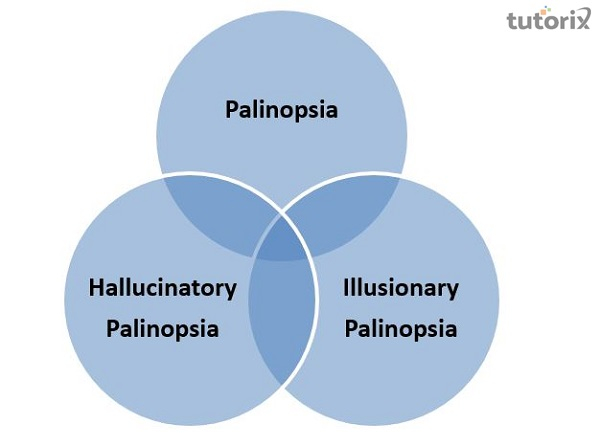 Hallucinatory Palinopsia − The term "hallucinatory palinopsia" refers to long-lasting, isochromatic, high-resolution afterimages that are not typically influenced by external factors such as light or motion. These Palinopsia are brought on by posterior cortical lesions or seizures and signify a problem with visual memory.

Illusionary Palinopsia − Afterimages that are unformed, blurry, or low resolution and are influenced by ambient light and motion are referred to as illusory Palinopsia. This type of Palinopsia is caused by head trauma, migraines, prescription medications, illicit drugs, or a defect in visual perception.

In Palinopsia, images of visual stimuli continue to exist or reappear even after it has physically vanished. It can occur as follows −

Palinopsia is a distortion of the visual system's processing in which images continue to exist or appear even after the visual input has been blocked. Any damage to or malfunctioning association areas at the intersection of the temporal, occipital, and parietal lobes can cause it. Palinopsia is a general term used to describe a wide range of symptoms; it is not a diagnosis. However, Palinopsia can be diagnosed using thorough patient history, visual field tests, and neuroimaging, among other methods.

The right-sided occipital and parietal lobe lesions cause the left lateral visual deficit and the superimposed hallucinations. Palinopsia is a rare side effect of seizure activity and may signify the cortex's inability to record a single image. In contrast to seizure activity, palinopsia visuals are well-formed, more like replicas of actual objects in the surroundings than true hallucinations, and are not accompanied by shifts in mood or level of consciousness. An EEG would quickly identify seizures causing isolated recurring visual hallucinations because occipital lobe discharges would be easy to spot.

Palinopsia's underlying mechanism most likely includes either deafferentation or cortical hyperactivity brought on by local irritation (such as epilepsy). Palinopsia of faces has been produced by activation of the fusiform face area, and supramaximal stimulation of the cerebral cortex can produce phosphenes that last up to 2 min after the stimulus has ended. It has been proven false that nondominant, right-sided occipital lesions are more frequently associated with Palinopsia.

Palinopsia is a symptom of epilepsy, and seizures in the brain's visual processing and memory centers may be the real cause of Palinopsia. Issues with peripheral vestibular function could potentially bring on palinopsia episodes. Palinopsia has been linked to several legal and illegal drugs, most of which cause illusory Palinopsia, including marijuana, mescaline, lysergic acid dyethilamide,3,4-methylenedioxymethamphetamine, topiramate, clomiphene citrate, Zosuquidar, Nefazodone, Interleukin 2 treatment, and trazodone.

Treatment for the many underlying causes of hallucinogenic Palinopsia, such as seizures, will typically result in a resolution. Clonidine, gabapentin, acetazolamide, magnesium, or calcium channel blockers are examples of drugs that reduce the excitability of neurons and may be used to treat illusionary Palinopsia. However, further research is required to determine their efficacy. Treatment for migraines is beneficial in cases where they cause headaches. Using sunglasses or other eyewear with tinted lenses may also help reduce the symptoms of illusionary Palinopsia.

Although it is difficult to predict how long palinopsia symptoms will remain, most medical professionals believe that the ailment is an uncommon temporary phase that will either go away on its own or advance to a visual field impairment that could last anywhere from days to months. Whether or not the underlying condition can be treated will determine how the condition is treated; other people may not react.

Optometrists should be aware of the palinopsia symptoms to identify this condition and reduce the possibility of a false positive. The doctor can more accurately determine the source of this unusual illness by understanding the physiologic systems involved. Palinopsia's symptoms may indicate a serious underlying systemic disorder that may require treatment, even though Palinopsia itself is not an illness. Additionally, by explaining the signs of Palinopsia, patients may feel more at ease about their frequently unsettling visual symptoms.