Make sketches of animal and plant cells. State three differences between them.

A plant cell is larger than the animal cell, and also performs two additional functions when compared to an animal cell- photosynthesis and supporting its own weight. 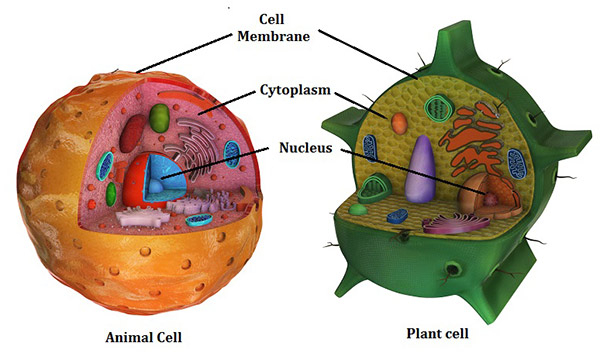 Following are the key differences between a plant and an animal cell:

2) The number of vacuoles is different for a plant and an animal cell. A mature plant cell has a single central large vacuole which mainly provides turgidity and rigidity to a plant cell. Animal cells have a number of small vacuoles mainly used for the storage of food and waste materials.

3) lysosome, which is the suicide bag of a cell, is present in animal cells but not in plant cells.

4) centrioles and centrosomes which take part in cell division are only present in animal cells and not in plant cells.

5) Plant cells have plastids present in them which are used for the manufacture and storage of important substances. Chloroplast, a type of plastid, is used by plants for the synthesis of food by the process of photosynthesis. Animal cells do not have plastids in them.