If you're a developer, QA engineer, or work in DevOps, you know how important it is to run various sorts of performance tests to ensure that each code update or feature addition (a) does not break the system and (b) works.

But which types of performance tests should you run, how do you tell the difference between load testing and other types of tests, and which test is best for every scenario? We'll go over the answers to these questions and more in this blog post.

What is the definition of performance testing?

Before you start performance testing, you'll need to figure out what your system's business goals are so you can tell if it's meeting your consumers' needs. Following the conclusion of performance testing, you can evaluate many key performance indicators (KPIs) such as the number of virtual users, hits per second, errors per second, response time, latency, and bytes per second (throughput), as well as the correlations between them. You may detect bottlenecks, faults, and errors using the reports, and then decide what needs to be done.

When is it appropriate to use Performance Testing?

When you want to examine the speed of your website or app, run performance tests, which may include testing servers, databases, networks, and other systems. If you use the waterfall process, you should test at least every time a new version is released. If you're going agile and shifting left, you should test frequently.

What is the definition of load testing?

A load test is a sort of performance test that examines how systems perform when a large number of virtual users make transactions at the same time over a period of time. To put it another way, the test assesses how well systems handle high load volumes. There are a few different types of open-source load testing tools, the most prominent of which is JMeter.

When should Load Testing be used?

When you need to know how many users your system can accommodate, run a load test. You can set up tests to imitate a variety of user scenarios, each focusing on a different aspect of your system (such as a checkout page, for example). You can see how the load behaves when it comes from various geo-locations, or how the load may grow up and then level out to a consistent level. Load tests should be performed on a frequent basis to ensure that your system is always up to date, and they should be included in your continuous integration cycles (utilizing tools such as Jenkins and Taurus).

In JMeter, a load test can be visualized as shown in the diagram below. This test examines adding 100 users every 30 seconds until the total number of members reaches 1,000. It takes 300 seconds to complete the stepping process. When the number of threads reaches 1,000, they will all continue to run and hit the server at the same time for the next 5 minutes. 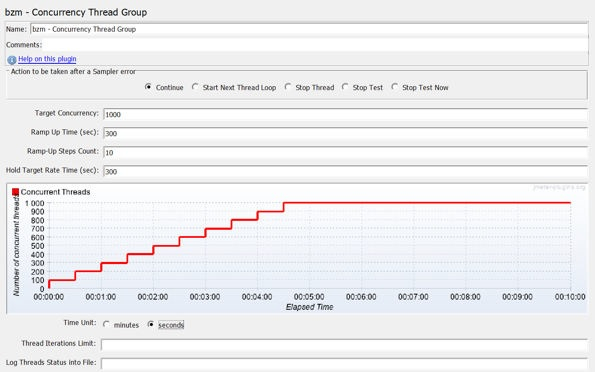 What exactly is stress testing?

A stress test is a type of performance test that examines your system's upper limits by subjecting it to excessive demands. Stress tests look at how the system reacts under high loads and how it recovers after returning to regular operation. Are the key performance indicators (KPIs) such as throughput and reaction time the same as they were before the load spike? Memory leaks, slowdowns, security concerns, and data corruption are all investigated during stress tests.

Load testing tools can be used to do stress testing by defining a test case with a large number of concurrent virtual users. There are several sorts of load tests, just as there are different types of performance tests. A Spike Test is when your stress test includes a rapid, high ramp-up in the number of virtual users. A Soak Test is when you stress test for a long period of time to assess the system's long-term viability using a slow ramp-up.

The following example explains how to use JMeter's "Ultimate Thread Group" component to produce a traffic spike. Three minutes into the test, we expect the system to be clogged. Using the "Initial Delay" parameter, we designate extra threads to be introduced within specific time intervals. 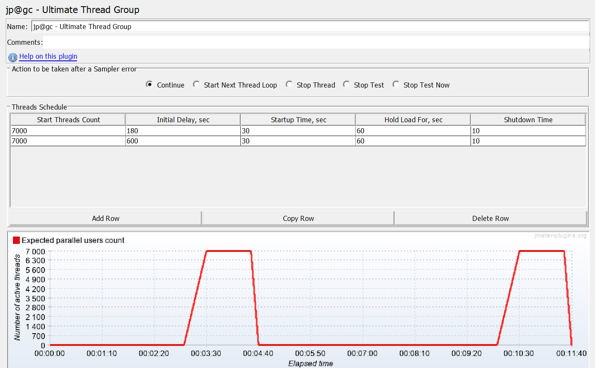 When should Stress Testing be used?

Before large events such as Black Friday, ticket sales for a popular performance with high demand, or elections, run stress tests on your website or app. We recommend stress testing your system on a regular basis to ensure you are aware of its endurance capabilities. This provides you more time and resources to repair your bottlenecks and ensures you're always prepared for unforeseen traffic increases.

Performance testing is a means of determining a computer's, network's, or devices' speed.

Load testing is a technique for simulating real-world load on a website or application.

Website servers, databases, and networks can all benefit from performance testing.

Client/Server and Web-based applications are subjected to load testing.

Stress testing involves putting your website through an unanticipated amount of traffic.