Anyone Learn Arduino without writing a single line of code, start creating projects with Arduino

Get Started with Arduino without writing a single line of code!!!

I firmly believe that everyone, regardless of their age, education or any other factor can start experimenting with Arduino and have fun doing it. Do lots of projects, either as a hobby or as a profession. With the same belief, Arduino itself was created and I am taking one small step ahead to make sure everyone finds it easier to start Arduino programming even easier.

Hence I've created this course with Ardublockly, which is a block-based Arduino programming based Course, where the students are not even needed to write a single line of code to learn Arduino!!! Yes, it's damn exciting and I'm sure you'll find it very easier to follow through the entire course. If you believe that you can make lots of projects with Arduino then read on...

Get Started with Arduino without writing a single line of code!!!

Do you want to learn Arduino but don't know to code? Then this course is specially designed for you. This course makes use of the Ardublockly which generates Arduino Code directly by using simple blocks. Anyone who can read English can program Arduino's with this course. There are lots of interesting interfaces included with Arduino which makes the course very much interesting. A detailed study of every interface including how to make connections on a breadboard and how to use every sensor with Arduino takes you from a complete beginner level to an intermediate level. With 25 different projects to finish, this is sure to keep you hooked for days

Support is here, shoot your queries!!!

This is the course, which has taken the longest time for me to create and record.

It took so many hours to record and re-record this course, was pure because of the nature of course, as I wanted anyone and everyone from any kind of background to be able to attend this course and learn how to do the experiments with Arduino. 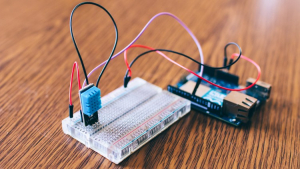