Kamaladevi Chattopadhyay, a Mangalore native, ran in the Madras provincial elections as India’s first female candidate for a legislative seat. She was a social reformer who was instrumental in bringing back handicrafts, theatre, and handlooms to improve the socioeconomic standing of Indian women. 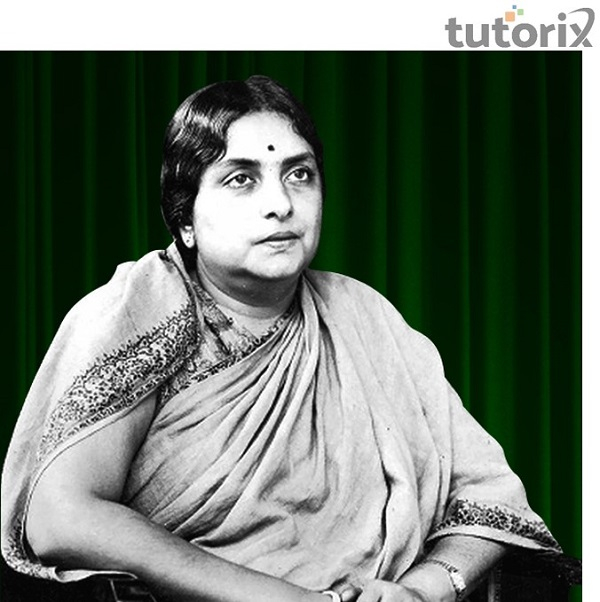 Who was Kamaladevi Chattopadhyay?

One of the many women who led the Indian independence movement but whose personal stories are underappreciated is Kamaladevi Chattopadhyay. Her priorities comprised mass-mobilization for the pursuit of independence from the British, in addition to serving as the first woman to run for a seat in the legislature and taking an influential position in the radical politics of the time. She recognised the importance of home-produced arts and crafts and the recognition of women’s domestic work, which is sometimes ignored when it comes to formulating policies and laws. She established and oversaw a variety of organisations throughout her lifetime in support of the numerous social causes.

Born on April 1903, The youngest of four siblings and a native of Mangalore, Karnataka, Chattopadhyay belonged to the Chitarpur Saraswat Brahmin community. Her upbringing was significantly influenced by both of her parents, who were progressive thinkers and active participants in the time’s liberation struggle. Before and after her father’s passing, it was primarily her mother who was in charge of providing for her academically. Her grandmother is reputed to have resisted widows’ restrictions and persisted in her quest for education and independence.

She attended Queen Mary’s College in Chennai to further her studies. She moved in with her maternal uncle after the death of her father, a social reformer who greatly influenced her political views. She got married in 1917 when she was fourteen years old, and although she was widowed two years later, she remarried in 1923, despite the social taboo at the time against widow remarriage.

Later in life, being influenced and supported by her mother and grandmother, she founded the Indian Cooperative Union and the Indian National Theatre. These organisations not only pioneered in their field, but they also served as early models for reputable cultural organisations like the National School of Drama and the Crafts Council of India. After a great life, she passed away on October 29th, 1988.

As a Fashion Activist and Influencer

Kamaladevi was passionate about ensuring the continued existence of traditional arts and crafts. Gandhi’s use of Khadi as a political tool to emphasise the value of local workmanship had a big impact on Kamaladevi. She promoted the idea that using one’s hands to perform manual labour helps to decentralise social and economic power away from an industry-focused state and fosters diversity in culture.

To promote traditional arts and crafts, the government established the Central Cottage Industries Emporium, but it was always losing money. As a result, the Indian Cooperative Union was given control over it with the intention of running it. Since then, Kamaladevi Chattopadhyay has advanced the Emporium by connecting with traditional artists and art forms in the farthest reaches of the globe and methodically addressing the issues of the craftspeople. Poochampalli, Toda Embroidery, Kalahasti Kalamkari, Jaipur Blue Pottery, Nandra Buti in Indigo, Stone Sculpture of Mahabalipuram, and a lot more are all thanks to Kamaladevi for their survival and restoration.

Kamaladevi is referred to as the “cultural queen of India” and has received several honours, including the Padma Vibhushan for her work, the UNESCO Award for Crafts Promotion, and the coveted Ramon Magsaysay International Award for her work in the community. She achieved numerous firsts, making Kamaladevi an outstanding woman. The wearing of cotton sarees, ethnic jewellery, flowers, or keeping terracotta or brass lamps at home was unfashionable for women in the early years of independence. The woman who revived all of the extinct art, craft, and theatre forms was also the woman who completely altered the cultural worldview.

She was the first chairman of the All India Handicrafts Board, established the nation’s first national awards for craftsmen, and assisted in establishing a network of cottage industry emporia throughout several cities. In addition to this, she sold her immovable property in Mangalore and founded the ICCR, the Sangeet Natak Academy, and a museum of theatre crafts. Among her accomplishments, these are just a few facets.

Over the course of her career, Kamaladevi Chattopadhyay presided over numerous organisations and government agencies. Among the many women she trained and led in the campaign for liberation, she was praised as an inspirational leader. Unfortunately, history fails to recognise their role alongside the male individuals they interacted with and engaged in combat with. A fitting tribute to an Indian cultural icon would be to end with the words of R. Venkataraman, a former president of India. "Flower buds seemed to blossom at her touch, whether they were human or institutional flower buds." As a result of her presence, people developed more human qualities and increased sensitivity to deeper social impulses.