For decades, jeans have been regarded as a fashion revolution. Denim was first discovered during the 18th century, when cotton production was abundant. It gained popularity because of its durability. Jeans were considered a pop culture fad in the early twentieth century, with Western cowboys in movies wearing blue jeans. The clothes became popular among teenagers during this time period. Manufacturers examined the situation and devised novel designs. They incorporated new colors, embroidery, and patchwork. 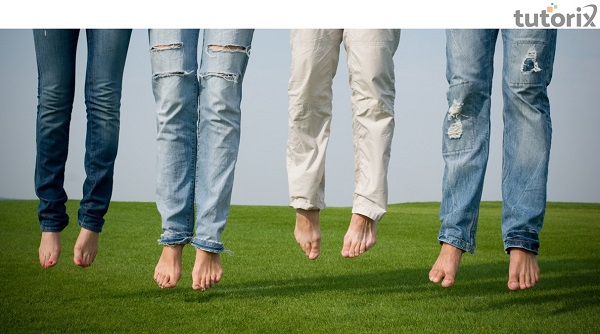 Though the jeans were made as early as in 18th century, but in the late nineteenth century, Levi Strauss popularised and named it "jean" Denim was then produced for miners. During the 1980s, fashion designers' attention was drawn to denim. New glamorous and upbeat patterns were promoted by popular models and brought to the forefront through commercials. Puffy pants, shoulder pads, etc., have become popular. It was one of the most popular garments in the 1990s. To capitalise on this opportunity, manufacturers devised a number of novel ideas. They wore denim skirts, caps, handbags, and so on. Denim sales increased dramatically. Denim is now available everywhere, all over the world.

Denim has risen from humble beginnings to become a fashion icon. It is now a symbol of modern culture, and celebrities and top models frequently wear it. During the 1990s, jeans transitioned from a commodity to a fashion item. During that time, jeans were evaluated as various other items such as jackets, shorts, skirts, and so on. These items were created in addition to the standard pants. Hippie bellbottoms and tapered legs were popular in the past. The current trend is all about variety, and it views denim as an art form with bold styles that are mostly used for the fast-paced

The current generation saves money by purchasing brand name designer jeans rather than any other accessory. What is the reason for this? One reason could be the role of celebrities. They have been seen wearing designer denim to events where formal attire would be appropriate. Gwyneth Paltrow was seen wearing blue jeans to the New York Fashion Week shows. This blue cult known as "Gwyneth Jeans" included celebrities such as Jennifer Aniston, Jennifer Lopez, Kate Hudson, and others. They were seen wearing jeans, which increased the popularity of denim.

One of the most popular was raw denim, which had not been washed or treated with chemicals. The virgin fabric was straight from the loom. Initially stiff, they later expand and conform to the body of the individual wearer's shape. Boot legs and boot cuts are typically preferred by men. Straight-legged zip flies are preferred over button flies. Men's favourite wardrobe item is boot-leg denim. Slimmy jeans fit men well and give them a classic appearance. Both prefer gap jeans with a loose fit. Selvage jeans are custom-made jeans. They are made on special looms that use more thread to make the fabric heavier and less prone to tearing.

There are light-weight jeans that are paired with skinny legs to scrunch up. Back pocket zippers, button flaps, and colorful stitches are features that draw people in from a distance. More trendy bell-legged jeans with an aqua wash for a more appealing look are also available on the market. Lightweight jeans with a multi-directional weave and detailed back pockets create an eye-catching look. Denims are now available in a variety of colors to meet the needs of fashion-conscious men.

Jeans has come a long way. It has been sustaining a profitable market for itself at an affordable price range for decades. This work of art ranges in price from $50 to $1,500. The price varies depending on the brand. A garment that was once worn while doing hard physical labor and was valued for its strength and durability is now a popular fashion item. Celebrities and models are frequently seen wearing and parading in them. This piece has piqued the interest of men all over the world. Men have adopted this piece from daily wear to fashion shows, magnified in all colors and worn by people of all ages, on any occasion, place, and time. Jeans is a trend that is here to stay.