Free ! BBM for Android and iPhone

BBM facilitates many features with good speed, and better privacy and control that user cannot get on other instant messenger apps. The new BBM Sends and receives messages in seconds, facilitates chat room for one-to-one or group communication with faster and easier ways to share photos, voice notes, location and more, video facilitates to speak face-to-face and share what’s on user screen. So, BBM™ communicates user to others how the way they want.

Get this free App

Android and iPhone users can get and use this interesting free app from given below destination,

To use BBM on Android smartphone, smartphones should have Android v4.0 (Ice Cream Sandwich) and later and with a screen size of 7” or less.

To use BBM on iPhone, iPhone should have iOS v6 and iOS v7 or later.

After download, this service can be avail by log-in into the app using a BlackBerry ID, if user have log-in ID then get into this app otherwise register yourself while creating user ID and password.

When user get into the account to avail this service, for iOS users the BBM allocates a PIN(Phone’s unique PIN number) same as like BlackBerry Messenger. It’s really useful because when users sign-in to BBM on another device with the same BlackBerry ID, it will ask user that they wants to switch the account to the new device or not. So, one ID can be used only on one device. 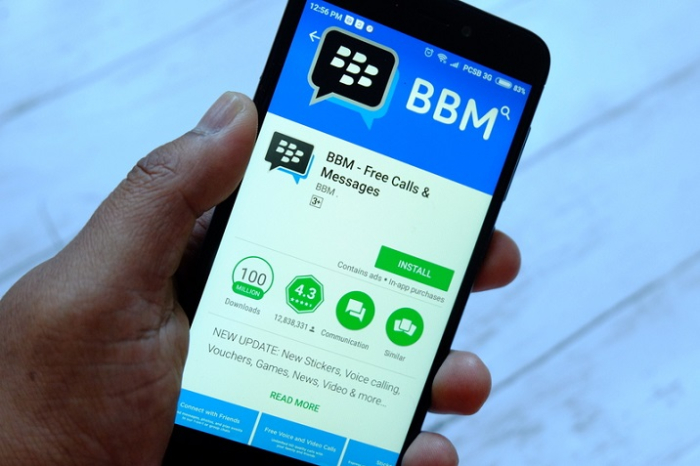 Sharing this PIN and add friends via SMS, email and social networks in addition to QR codes. Even if two iPhones users have the BBM app installed in their phone the PIN would first display in Messages and needs other the user to manually enter it. This BlackBerry function 2-way opt-in gives full security and control over who adds you.

BBM is available for BlackBerry and Android smartphones as well as iPhone, iPad and iPod touch. The BBM service without a Wi-Fi network connection requires a data plan and additional charges may be applicable on this plan.

The BBM Interface and Features

Chat with friends on Android, BlackBerry and iPhone with features like sharing photos videos, mobile screen and many-more. BBM is continuously becoming popular among millions of user at mobile platform for chatting and connecting with friends or colleagues. Its 2-way opt-in feature provides full security and control over who adds you.

Using BBM, more than 50 friends can group together on chat to share pictures, videos, messages and other stuffs.

When user first time log-in into the BBM, BBM automatically generates a PIN(Unique identifier), it is helpful to invite someone into the BBM contact by sharing PIN, or ask for theirs. A better way of communication, without sharing any personal information like; email address or phone number. User PIN Barcode (this looks like a QR code) is one more way to add new contacts on BBM rather than typing the PIN number. As soon as friend scans the PIN Barcode, both user will be in each other contact list. In this case no personal information with be exchanged except unique PINs.

User contacts get automatically backed up when user uses a BlackBerry ID to login to BBM on Android or iPhone. If user login into a different device using the same BlackBerry ID, user will be prompted to restore their contact list.

Supports single device at a time

BBM supports single device at a time, user cannot install BBM into other devices and login with the same BlackBerry ID. To use BBM on multiple devices, create an additional BlackBerry ID with a separate email address.

Now, BlackBerry Messenger, a secure messenger system is not only available on BlackBerry devices, also on Android device and even on iOS powered devices. Interested user can use this useful communicating stuff and enjoy whatever they want.