(a) Microorganisms can be seen with the help of a microscope.

(b) Blue-green algae fix nitrogen directly from the air and enhance the fertility of the soil.

(c) Alcohol is produced with the help of fungi (yeast).

(d) Cholera is caused by bacteria.

Nitrogen fixation: It is the initial step of the nitrogen cycle in which atmospheric nitrogen (N2) is converted into ammonia. During nitrogen fixation, the inert nitrogen gas gets deposited into soils from the atmosphere through precipitation. Then the two nitrogen atoms get separated and combine with hydrogen to form ammonia (NH4+). 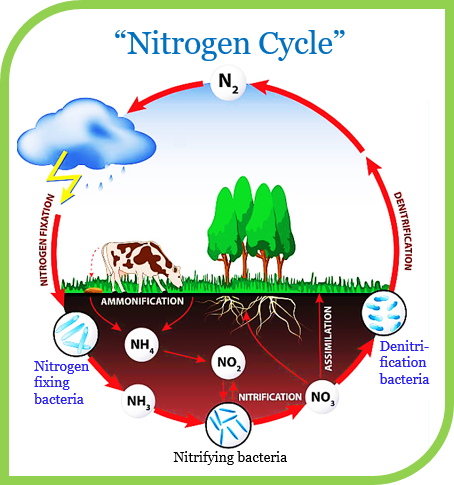 Cholera is a waterborne disease. It can spread if food and, in particular, water become contaminated with the stools of an infected person. Cholera is caused by the bacteria, Vibrio cholerae.

Fermentation is an enzyme-catalyzed metabolic process in which an organism converts carbohydrates, such as starch or sugar, into alcohol or acid, anaerobically releasing energy. Alcohol Fermentation is used in the industrial production of wine, beer, biofuel, etc. The end product is alcohol and CO2.

Yeast and some bacteria carry out this type of fermentation where enzymes like pyruvic acid decarboxylase and alcohol dehydrogenase act as catalysts.