What is an Indifference Curve?

The indifferent curve is a graphical representation of the utility of two products that offer similar kinds of satisfaction to a consumer. 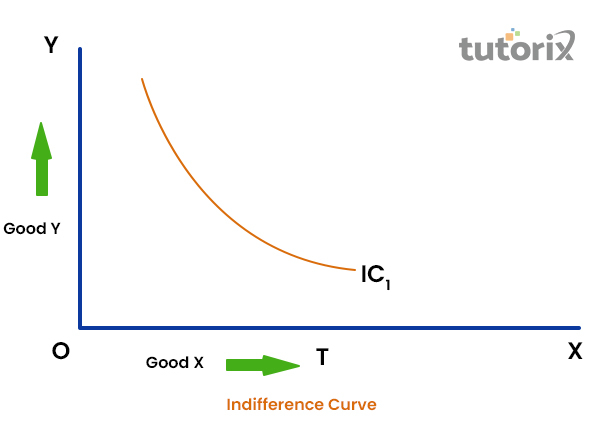 An indifference curve may show how consumer preferences and budget constraints may affect their decisions of buying the products. There are other applications of indifferent curves too. These curves can be used in welfare economics via marginal utility theory.

The following example will help understand the situation better.

The person gains satisfaction from having 1 scoop of ice cream and 12 packs of chips.

He is also satisfied with 2 scoops and 6 chips packs.

When the person is offered more choices, the following scenario comes up.

If we plot the combinations on a graph we will get an indifference curve.

Any combination lying on the indifference curve of the person will give the same level and kind of satisfaction to him.

The analysis of an Indifference Curve can be done on a simple two-dimensional graph. Each axis of the graphical representation indicates a specific type of product. When the graph lies on a curve or line, it means that the consumer almost does not have any preference for any product. This is so because all of the products will deliver the same kind of utility or satisfaction to the consumer on the graph or line.

The shift of indifferent curves also helps to illustrate why no intersection takes place between two indifference curves while drawing an indifference map. As the whole curve shifts upwards and downwards, the curves lie parallel to each other and do not intersect.

Some of the key features of Indifference Curve are as stated below.

If such changes do not occur, the consumer will be unable to derive the same satisfaction from the combination of commodities. That is why the curve gets a negative slope and moves from left to right.

An indifference curve is always strictly convex to the origin

The shape of the indifference curve is such that they always form a convex shape to the origin. This is related to the law of diminishing marginal utility. The law of diminishing marginal utility states that a consumer tends to sacrifice lesser units of a commodity for every extra unit of another good. That means that the consumer will only give up the exact amount that needs to be given up.

Nothing extra or additional units will be offered when the proportions of two commodities are exchanged. The diminishing marginal utility is applicable to all indifferent curves.

It is also assumed that consumer preferences are often monotonic in nature. This means that they always want more of a product to get more production out of it. As the quantity of the product goes up, its overall consumption rate goes up and along with it, the satisfaction level also goes up.

Indifference curves can show the overall comparison of satisfaction levels derived from two products. They are proportional in nature meaning that the satisfaction derived from the two products remains the same over the course of time. Therefore, when the demand for one product goes up, the demand for the other comes down. This helps economists and analysts determine the comparative demands of products that are used to show the overall demand for one product at a certain point in time.

Ans. The indifferent curve is a graphical representation of the utility of two products that offer similar kinds of satisfaction to a consumer. Two products are used in the comparison while drawing the indifference curve.

Qns 2. What is the slope of an indifference curve?

Ans. The indifference curves have a negative slope that is downwards and from left to right.

Ans. No. Indifference curves on an indifference map never intersect each other.