Significant features of abnormal behavior include:

According to the Diagnostic Statistical Manual of Abnormal Behavior, 5th edition (DSM-5, [APA], 2013), mental disorders have the following components: 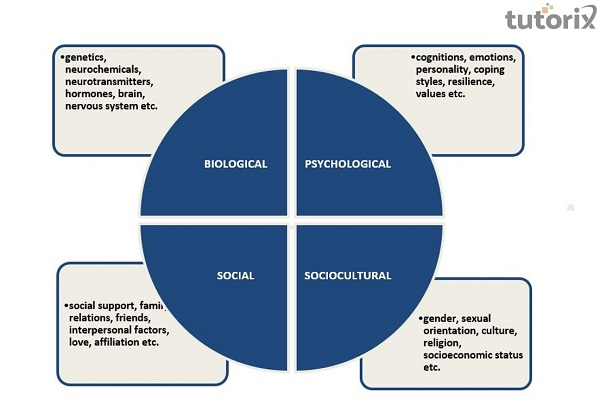 Biological factors are the most primitively understood underlying factors known to influence abnormal behavior. The biological factors include the role played by the genes, the human brain, the nervous system, neurochemicals, hormones, neurotransmitters, neuroplasticity, etc.

Many mental disorders or abnormal behavior have genetic etiology, which contributes to the understanding that genes predispose an individual to any vulnerability or illness. This leads to the discussion of heredity, the genetic transmission of traits that can contribute to abnormal behavior development. Some well-known disorders like schizophrenia, phobia, and depression may have an underlying heredity factor.

The human brain is responsible for many specific functions, including thoughts, emotions, motivation, memory, appetite control, voluntary and involuntary movements, etc. The entire communication in the body and brain is done via hormones and neurotransmitters, and an imbalance in messengers can lead to disturbance in daily functioning. For example, a neurotransmitter, Acetylcholine, is linked with Alzheimer's disease, and the hormone melatonin, which regulates the sleep cycle, is associated with depression.

The psychodynamic perspective views childhood experiences, fixation, and internal conflicts as an underlying factor in the development of abnormal behavior. According to this model, personality is formed of three components; id (pleasure principle), ego (reality principle), and superego (moral principle). Conflict in these three components leads to emotional symptoms, which threaten to resurface and thereby push into the unconscious or start using defense mechanisms which are the roots for abnormal behavior.

The behavioral perspective views abnormal behavior as a result of learning, reinforcement, observation, and modeling. With the help of experiments like Pavlov's classical conditioning, Skinner's rat operant conditioning, and Bandura's observational learning, this perspective explains the underlying factors for abnormal behavior. For example, a child learns the phobia of dogs through observation of their family member.

The cognitive perspective focuses on irrational and distorted cognitions or thoughts as the underlying factor of abnormal behavior. According to this model, how we think and interpret a situation determines our emotional reactions and adaptive and maladaptive behavior. Therefore, abnormal behavior like depression, anxiety, and obsessions result from thoughts about the events.

Lastly, the humanistic perspective points out that when an individual is brought up in a situation where conditions determine their growth and development, they cannot become a self-fulfilling individual, which is detrimental to reaching self-actualization.

Family, parenting styles, peer relationships, social support, belongingness, job, and many more factors play a role in the development and management of abnormal behavior. These underlying social factors contribute to how an individual reacts to a particular stressor or life event. Poor quality, meaningless, or no social relationships can increase the susceptibility to maladaptive coping and the development of abnormal behavior.

Gender determines the roles, responsibilities, and expectations others put. It has been seen that women have a higher prevalence rate for some disorders like anorexia nervosa and chronic stress trying to adjust to the societal standards put on women. Women become targets of sexual objectification and sexual abuse leading to other mental disorders like depression, PTSD, etc.

A poor social, economic, and physical environment may be detrimental to one's mental and physical health. People from poor socio-economic status face difficulty fulfilling their basic needs, making them prone to mental illness.

Another very important aspect is belonging to a different race or ethnicity. People who face prejudice and discrimination experience loneliness and feelings of not being accepted, which is an underlying factor for developing abnormal behavior.