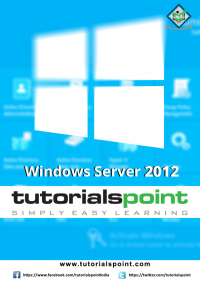 Windows Server 2012 codenamed Windows Server 8 is the most recent version of the operating system from Microsoft regarding server management, but not the last one which is Windows Server 2016. Officially it was released on August 1, 2012 and is just a commercial version as of now.

Windows Server 2012 has four editions: Foundation, Essentials, Standard and Datacenter. Each one of them has their own limitations except the Datacenter version, which is also the most expensive one.

This is an introductory tutorial that explains all the fundamentals of Windows Server 2012.

This tutorial has been designed for all those readers who want to learn the features of Windows Server 2012. It is especially going to be useful for all those professionals who are required to install and use this operating system to perform various duties in their respective organizations.

We assume the readers of this tutorial have a practical experience of handling a Windowsbased Servers. In addition, it is going to help if the readers have a basic knowledge of how to install and use an operating system.