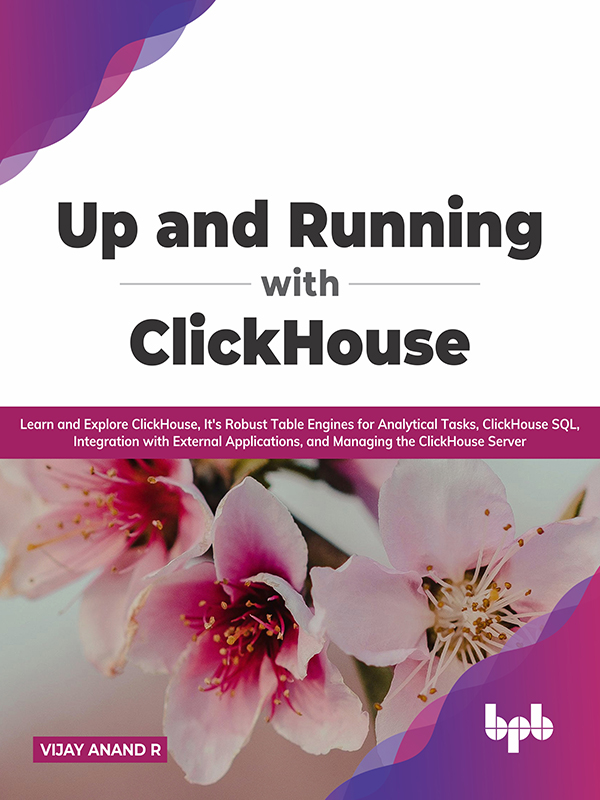 Up and Running with ClickHouse

● Hands-on approach towards learning ClickHouse from basic to advanced level.
● Numerous examples demonstrating how to use ClickHouse for analytical tasks.
● Straightforward explanations for complex concepts on ClickHouse and its vast features.
● Integration with a variety of technologies such as MySQL, PostgreSQL, Kafka, and Amazon S3.

This book provides a hands-on approach for data professionals to onboard ClickHouse and empowers the readers to perform real-time analytics using ClickHouse SQL.

Throughout this journey, readers will reinforce their learning by using numerous working examples and the question and answer section at the end of each chapter. By the end of this book, readers will be able to apply their knowledge and utilize ClickHouse in real-world applications.

● Querying the tables in ClickHouse and performing analytical tasks using ClickHouse SQL.
● Integrating and running queries with popular RDBMS, including MySQL and PostgreSQL.
● Integrating with cloud storage and streaming platforms such as S3 and Kafka.
● Working with Core engines and special engines.
● Configure the ClickHouse setup and carry out administrative tasks.

This book is intended for data engineers, application developers, database administrators and software architects who want to learn ClickHouse.