A complete hands-on guide to modern web and mobile development with React.js

Get up to speed with React, React Native, GraphQL and Apollo for building cross-platform native apps with the help of practical examples

React and React Native, Facebook’s innovative User Interface (UI) libraries, are designed to help you build robust cross-platform web and mobile applications. This updated third edition is improved and updated to cover the latest version of React. The book particularly focuses on the latest developments in the React ecosystem, such as modern Hook implementations, code splitting using lazy components and Suspense, user interface framework components using Material-UI, and Apollo. In terms of React Native, the book has been updated to version 0.62 and demonstrates how to apply native UI components for your existing mobile apps using NativeBase.

You will begin by learning about the essential building blocks of React components. Next, you’ll progress to working with higher-level functionalities in application development, before putting this knowledge to use by developing user interface components for the web and for native platforms. In the concluding chapters, you’ll learn how to bring your application together with a robust data architecture.

This book is for any JavaScript developer who wants to start learning how to use Facebook’s UI libraries, React and React Native, for mobile and web application development. Although no prior knowledge of React is needed, working knowledge of JavaScript programming will help you understand the concepts covered in the book more effectively.

Adam Boduch has been involved with large-scale JavaScript development for nearly 10 years. Before moving to the frontend, he worked on several large-scale cloud computing products, using Python and Linux. No stranger to complexity, Adam has practical experience with real-world software systems, and the scaling challenges they pose. He is the author of several JavaScript books, including React and React Native, and is passionate about innovative user experiences and high performance. 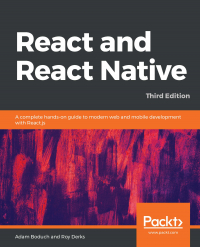