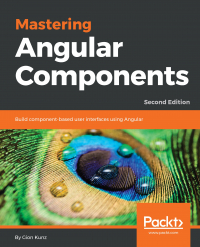 Mastering Angular Components covers a new holistic way of thinking about UI development, and helps you discover the power of Angular 6 components through various examples. The book starts with an introduction to component-based user interfaces and how Angular 6 manages this concept. Following a step-by-step approach, you will build a fully functional task-management application using Angular. You’ll start with basic layout components, adding some core task-management components before completing the first draft of your application. You will then move on to working through a refactoring exercise in order to learn how to enhance the way you deal with states and data. Once you have got to grips with all this, you will study how to make use of the Angular router within your application.

By the end of this book, you will be able to constantly refine the functionality of your application and create components that render SVG graphics, add a time-tracking feature, visualize data using third-party library Chartist, and even create a plugin architecture using Angular components.

Mastering Angular Components is for you if you are an Angular developer who already has a good understanding of basic frontend web technologies such as JavaScript, HTML, and CSS.