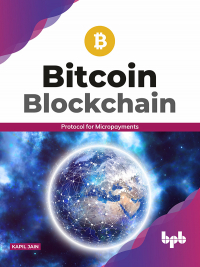 â— Get familiar with the working of the Bitcoin network, protocol, transactions, Smart contracts and the incentive models of Bitcoin.
â— Learn advanced concepts such as Metanet and Tokenized protocol.
â— Work with tools and utilities to build consumer and enterprise applications.
â— Get a full explanation of cryptography and its math in Bitcoin.

In 2008, Satoshi Nakamoto released a codebase and whitepaper for a network that came to be known as the Blockchain. It was the first successful attempt to create electronic money after decades of failed attempts across the world. However, the basis of its success is not just the digitalization of currency into electronic form, but its peer-to-peer node network and the public storage of all transactions in time-stamped blocks chained together called as Timechain in the whitepaper. It also introduces a non-trusted third party transaction processor, which replaces the current centralized trust-based systems. What happened next is history, and today, it is a multi-billion dollar industry across the world. Bitcoin Satoshi Vision Blockchain restored the original version of the Bitcoin protocol and it is now a thriving developer, business and enterprise ecosystem.
This book offers a practical deep dive into every aspect of the Bitcoin protocol. It includes the math behind the Cryptography and a detailed overview of the application-level protocol, which works on top of the Bitcoin Blockchain network. It also focuses on the core principles and fundamental concepts of Bitcoin to explain the constructs of a Blockchain type system.

What will you learn

â— You will learn the internal workings of Bitcoin and get the ability to understand most blockchains that exist.
â— Create applications using bitcoin as a public registry and a data storage ledger.
â— Create and store data on Blockchain as DAG.
â— Discover and get familiar with the advanced Application layer protocols.
â— Get familiar with the law and regulations applicable to Bitcoin.

This book is for anyone who is interested in exploring blockchain technology. It will appeal to Developers, Architects, Technology Managers and Executives who wish to build new or transform their existing applications to a blockchain based system to gain efficiencies in Cost, Scalability, Security and Robustness.