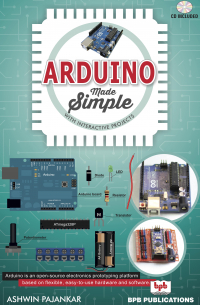 Arduino is an open-source electronic prototyping platform based on flexible, easy-to-use hardware and software

The book is written in such a way that the concepts are explained in detail, giving adequate emphasis on circuits and code examples. To make the topics more comprehensive, circuit diagrams and code snippets are furnished extensively throughout the book. The book is designed in such a way to make it reader-focused and contains latest topics, circuit diagrams, code examples, & reference.
The book also features the most current and popular Arduino boards. It teaches novice beginners how to create interesting electronics project with Arduino platform and ecosystem. It also benefits the professional level programmers to get started with Arduino platform and ecosystem.

What will you learn

ASHWIN PAJANKAR is a polymath. He is a Science Popularizer, a Programmer, a Maker, an Author, and a Youtuber. He is passionate about STEM (Science-Technology-Education-Mathematics) education. He is also a freelance software developer and technology trainer. He graduated from IIIT Hyderabad with M.Tech. in Computer Science and Engineering. He has worked in a few multinational corporations including Cisco Systems and Cognizant for more than a decade.