Most chronic diseases are accompanied by more or less prominent dysautonomia symptoms, which often and visibly worsen patients' quality of life. It could be chronic or acute, progressive, or reversible. Dysautonomia can occur in several common illnesses, including diabetes and alcoholism. Dysautonomia can also be the main condition or co-occur with degenerative neurological disorders like Parkinson's. 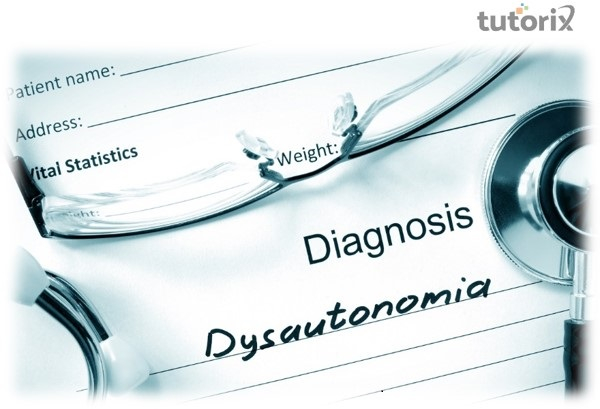 Dysautonomia is characterized by a failure or increase in the autonomic nervous system's sympathetic or parasympathetic component activity (ANS). Clinical signs include reduced lacrimation, poor thermoregulation, orthostatic hypotension (hypotension, orthostatic), fixed pupils, increased perspiration, loss of pain and temperature sensitivity, and lack of reflexes. These signs are evident at birth. Pathologic hallmarks include a decrease in the number of small-diameter peripheral nerve fibers and autonomic ganglion neurons.

Dysautonomia manifests a wide range of clinical signs and symptoms, including exhaustion, unstable blood pressure, orthostatic hypotension, dysfunction in heart rate variability (HRV), the emergence of impotence, dysfunction of the bladder, and impairment of bowel functions. In FD patients, anxiety is the most prevalent psychiatric condition. Even a small amount of anxiety causes noticeable hypertension and tachycardia, which can lead to nausea and vomiting. About 10% of people with FD experience trichotillomania, compulsive hair pulling, and skin or nail picking. Deep wounds and scars may result from the inability to feel pain.

Autonomic dysfunction is not uncommon in general. The most prevalent autonomic dysfunction occurs in the cardiovascular control sphere and is characterized by an aberrant vasovagal response, which causes syncope. Other typical symptoms include postural tachycardia syndrome (POTS) or abnormalities associated with Parkinson's disease and other parkinsonism. Urinary incontinence, as seen in multiple sclerosis and other nervous system illnesses, is unspecific but relatively uncommon compared to other areas of autonomic regulation. Some autonomic disruption symptoms, such as face vasomotor and ocular symptoms in trigeminal autonomic headaches, are of secondary importance but aid in diagnosis.

The goal of treating FD is to lessen the catecholamine surges brought on by baroreflex failure. To avoid respiratory failure, neurogenic dysphagia must be managed with good protection of the airway passageways and rapid aspiration pneumonia treatment. The possibility of respiratory depression should be considered when using sedative drugs. When used during sleep, non-invasive ventilation efficiently controls apneas and prevents hypercapnia. Compounds that elevate IKAP (ELP-1) levels are undergoing clinical trials to see if they can stop or halt the progression of the illness.

The management of anxiety in FD is challenging. Benzodiazepines, such as diazepam, should only be administered occasionally since they impair mood and ventilatory drive. Despite the absence of controlled research, selective serotonin reuptake inhibitors can occasionally be helpful. Psychotherapy and behavioral approaches can often help with anxiety management, but they take patience and a long-term time commitment.

It is crucial to take family dynamics into careful account. Any FD patient should have clear expectations and boundaries, which should be addressed with families. Parental counseling is vital for setting realistic expectations. The cognitive performance varies greatly between FD patients. Patients at one end of the spectrum cannot speak or regulate their bowels or bladder, while those at the other end are capable of finishing college and holding down a full-time job. Poor concentration and issues with learning are both prominent. Drugs that cause significant hypertension, such as stimulants and norepinephrine reuptake inhibitors, should be avoided. Numerous patients need specialized education programs.