Schizophrenia is a chronic psychological disorder that manifests in almost all domains of one's life. Along with the manifestation, the disorder also has an interestingly complex causal and risk factor. The role of both nature and nurture is seen in this disorder, of which none can be undermined. Schizophrenia is thus a result of the interplay of genetic, neurodevelopmental, psychosocial and cultural, psychological, and environmental factors, all of which may act as risk factors that increase vulnerability to Schizophrenia. 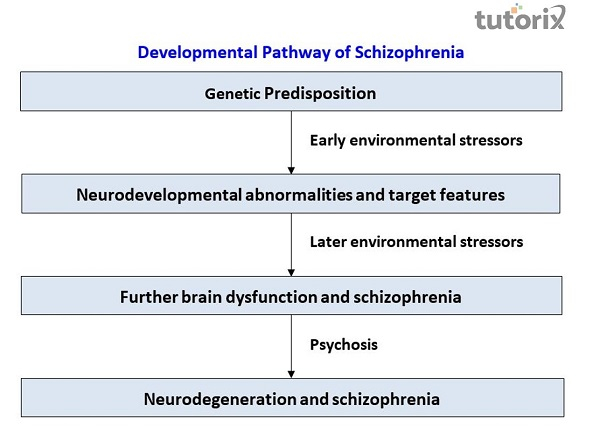 Genes are one of the fundamental causes of susceptibility to schizophrenia, but no one gene is alone responsible for the disorder. Rather many genes may lead to it. There also exists strong evidence of Schizophrenia running in families, which has been confirmed by family, twin, and adoption studies. Research shows that identical twins are most likely to share Schizophrenia, followed by fraternal twins, children, siblings, parents, half-siblings, grandchildren, and so on. This implies that a person whose parents had schizophrenia is more likely to suffer from it than children whose grandparents have the disorder.

Another set of genetic risk factors is molecular genetics which indicates that many genes work together to cause the vulnerability of schizophrenia. The COMT gene on chromosome 22 and some dopamine receptors genes predict vulnerability to the disorder. Further, endophenotypes and traits closely controlled by genes can also be used to infer the relationship between genes and schizophrenia, and such genes have been shown to have a strong association with the disorder.

These factors refer to factors about an individual's pregnancy, fetal, and infant period. These factors are closely related to genetic factors and impact both developments and genetic expression, thereby impacting the vulnerability of the disorder. These can be enumerated as follows:

Investigation of the role of psychosocial factors as a risk factor for Schizophrenia has always been of great interest to psychologists, and theories about them have been in the literature since the first half of the twentieth century. The psychosocial factors can be understood under the following heads:

Beyond the prenatal, psychosocial, and genetic risk factors, one's personal experiences like stress and trauma may also affect the incidence of this disorder. Interestingly, it has been observed that the incidence of schizophrenia is higher in children born in late winter/early spring. Further, psychological characteristics like resilience, health behavior, and social support may also decrease vulnerability to the disorder even if a genetic predisposition exists. However, one thing is clear no one risk factor alone is capable of causing the disorder, and only the interplay or combination of more than one factor provides a good breeding ground for Schizophrenia.