A decision tree is a structure that includes a root node, branches, and leaf nodes. Each internal node denotes a test on an attribute, each branch denotes the outcome of a test, and each leaf node holds a class label. The topmost node in the tree is the root node.

The following decision tree is for the concept buy_computer that indicates whether a customer at a company is likely to buy a computer or not. Each internal node represents a test on an attribute. Each leaf node represents a class. 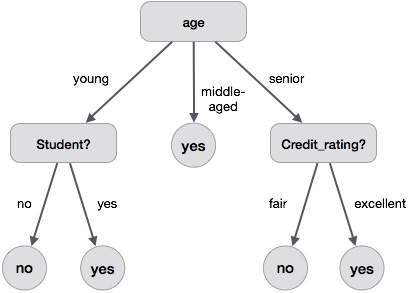 The benefits of having a decision tree are as follows −

A machine researcher named J. Ross Quinlan in 1980 developed a decision tree algorithm known as ID3 (Iterative Dichotomiser). Later, he presented C4.5, which was the successor of ID3. ID3 and C4.5 adopt a greedy approach. In this algorithm, there is no backtracking; the trees are constructed in a top-down recursive divide-and-conquer manner.

Tree pruning is performed in order to remove anomalies in the training data due to noise or outliers. The pruned trees are smaller and less complex.

There are two approaches to prune a tree −

The cost complexity is measured by the following two parameters −