Carl Jung’s “Balance of Personality theory” describes the personality of individuals. Jung, who was a Swiss psychiatrist and psychoanalyst, was the founder of analytical psychology. His work has played major roles in the fields of psychiatry, psychology, anthropology, archaeology, philosophy, literature, and religious studies. Jung worked Sigmund Freud, the founder of psychoanalysis. Both together conducted a lengthy correspondence and collaborated, for a while, on a joint vision of human psychology; however, later separated.

Jung believed that there are four functions that control the way people view and act in the world, and these functions are thinking, feeling, sensation, and intuition. He further believed that dreams helped a person "work on" problems in life by bringing suppressed desires into consciousness. He was confident that our personality begins with a collective unconscious, developed within our species throughout time, and that we have only limited ability to control our personality's psychic process. Thus, our true personality arises from within as our collective unconscious becomes our personal unconscious and then our consciousness.

Jung is famous for examining character, dream analysis, and the human mind. His speculations are adored to the point that they were made into their school of psychotherapy. Jungian brain science is called scientific brain science. He developed his theory, which applied natural laws concepts to psychological functioning. He introduced the idea of personality types. He began to address personality development throughout his lifespan. He proposed that the human psyche contains psychological constructs. These constructs were developed throughout the evolution of the human species. How about we look further into the primary speculations of Jungian brain science? 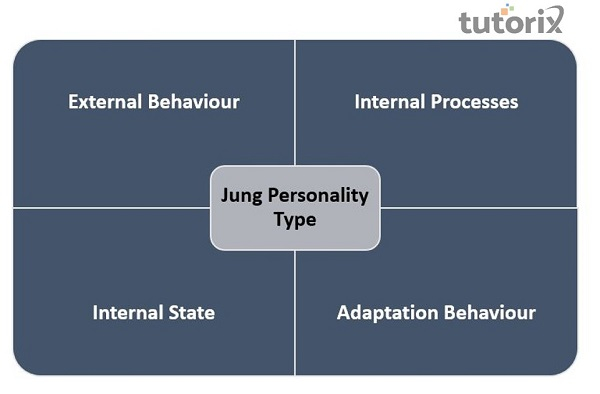 Carl Jung recognizes two unique attitude types in his personality theory: introverts and extroverts. Introverts are those people who get feelings from the inside. Extroverts are people who accept their excitement from the climate.

Loners are removed or modest. They are more commonly known as people who get their energy from being separated from everyone. Loners have the option to re-energize through less energizing exercises. However, social butterflies get energy from being around others. These people participate in stimulating activities. For instance, Katrina is outgoing; she loves to go out with the group and explore. Her companion, John, however, is the inverse. Given the decision, he would prefer to peruse a book on his sofa than go skydiving with Katrina. John is a self-observer. 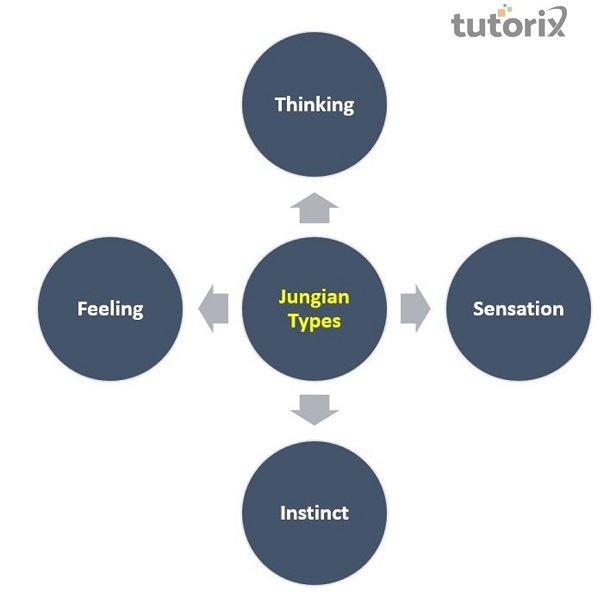 Thinking − Applying thinking to the circumstances and conditions you experience. For instance, John likes to thoroughly consider everything and every upside and downside before settling on a conclusion about anything.

Feeling − Applying abstract, individual assessment to the circumstances and conditions you experience. Dissimilar to John, Katrina depends on her sentiments to advise her on how to pursue a choice. If something feels better, she takes the plunge; if it doesn't, she evades it.

Sensation − Applying stylish worth to the circumstances and conditions you experience. For instance, while choosing how to organize his front room, John attempts to make things hugely balanced. If there is a seat on one side of the room, he needs to put a similar seat on the opposite side to adjust it. This evenness makes the room look decent.

Instinct − Utilizing your oblivious or the otherworldly to grasp your encounters. For instance, Katrina thinks John is orchestrating his furniture completely off-base. Karina accepts it is essential to organize furniture separately to achieve positive energy.

The Dynamics of Personality

Jung saw mystic energy as a summed-up moving source. It assists the self with achieving a feeling of equilibrium. Oneself executes a sense of balance inside the character by the recurring pattern of magical energy among the different parts of oneself, as indicated by three essential standards. As per the rule of alternate extremes, there is a contrary response elsewhere inside the framework for each cognizant or potentially oblivious response inside the character. For example, balance the advancement of the logical side of nature at work with looking for additional innovative pursuits during seasons of recreation.

Per the comparability rule, any magical energy is taken from one clairvoyant construction. For example, dedication to companions. Then again, the principle of entropy expresses that when one part of the character has a more critical measure of magical energy (for example, packing for a test), the energy will stream back to the more vulnerable viewpoint to create a feeling of equilibrium (for instance, by investing additional energy with companions after the test).

Carl Jung believed in a dynamic interaction between the conscious and unconscious minds. It was similar to that proposed by Freud. His notion of the psyche included elements of an unconscious mind that transcends the person. It may be considered a combination of the soul and one's thoughts and sensations. This inner psychic realm can affect the brain and its functions. It can influence one's perception of external reality.

Besides, Jung thought of the libido somewhat differently than Freud. Jung considered sexuality an essential aspect of the libido. However, he primarily thought of libido as a more generalized form of life energy. Carl Jung believed that as the human species evolved, the nature of sexual (or survival) impulses transformed.

Jung saw mystic energy as a summed-up inspirational source. It is intended to assist the self with achieving a feeling of balance. There is a contrary response elsewhere inside the framework for each cognizant. Then again, the guideline of entropy expresses that when one part of the character has a more critical measure of magical energy, the energy will stream back to the more vulnerable viewpoint. Jung believed that everyone's main goal is to develop their personality's potential fully. Jung called this process individuation. As Freud had before him, Jung evolved a grand vision of how analytical psychology might help society. One unique theory was that the Western world had much to learn from Eastern cultures.