We have often heard the definition of "brain" as the central processing unit controlling our entire body. However, have you ever wondered how the brain allows us to think, feel, and act? How does the brain influence how we react to a given stimulus? Do you think this could be the brain's ultimate goal? A brain injury can impact a person's behavior to a great extent. How do the brain and body coordinate to respond to external and internal demands? 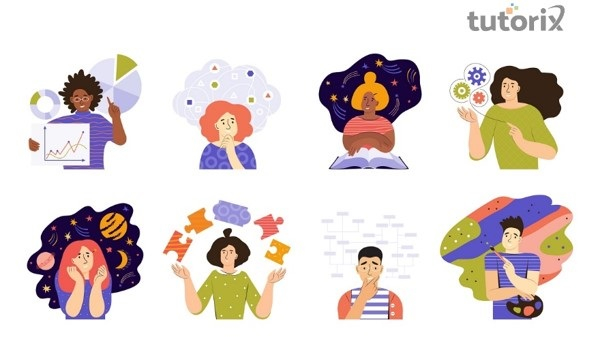 What is the Brain-Behavior Relationship?

In so many disorders, such as dementia or Parkinson's, it has been discovered that the brain influences behavior to a large extent. For example, it can be seen that when the brain suffers damage or alteration, its effects can be seen in human behavior. Therefore, scientists have concluded that the brain plays a big role in influencing behavior. Neuroscience, Behavioral Psychology, and Biological Psychology aim to explain behavior in terms of brain activity. The study of brain-behavior relationships thus involves answering questions such as −

Ancient Greek philosophers suggested that the cause of behavior was primarily the brain. They were the first to point out a relationship between the brain and behavior. Rene Descartes differentiated between the body and the mind. He said that the brain and the mind are separate entities. According to him, the brain controls perception, motor activities, memory, hunger, and reproduction; all of this can be found in lower animals. On the other hand, the mind is responsible for higher mental functions, such as conscious experiences that are unique to human behavior.

Several theories have been developed by biologists, anatomists, and neurologists to understand the relationship between the brain and behavior. Some came up with the idea that the brain has specific regions that contribute to particular behaviors. They were focused on the concept of localization. However, many supported the idea of a holistic brain. The holistic approach to the brain contends that it is crucial to view the mind as a whole rather than attempting to dissect it into its component pieces. Each component functions within an integrated system while simultaneously fulfilling its vital purpose.

The work done by Broca, Wernicke, and Jackson refuted the holistic brain theory. They contended that different motor or sensory behaviors could be attributed to different brain regions. This view was further researched, and another view, called "cellular connectionism," came into the picture. This view suggests that neurons are the principal units and horsepower of the brain. They are arranged in clusters, and they are well connected systematically. Different interconnected brain regions are responsible for different behaviors.

How the Brain Produces Different Behaviors?

Researchers have tried to understand how the functions of the nervous system, particularly the brain, relate to complex human behavior. They have tried understanding the neurological underpinnings of thoughts, emotions, and behavior. You may comprehend how the brain, environment, and behavior interact to produce distinctive forms of behavior by studying the biological elements of the brain.

Since neurons are central in this type of communication, it is important to understand the structure. Although the entire process of how the brain produces behavior can be a little complicated, the function of a neuron is quite simple: to activate or not activate. 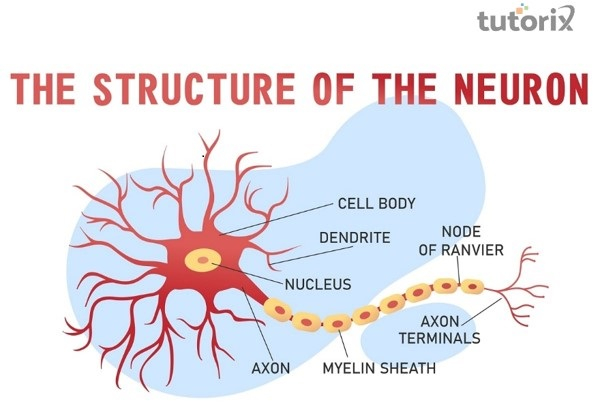 The three main parts of a neuron include the axon, the cell body, or soma, and the dendrites. A neuron consists of many dendrites responsible for receiving incoming signals and sending them to the axon. The axon performs the function of carrying the signal away from the neuron. The axon transmits information throughout its length, ranging from less than a millimeter in the brain to several feet in the spinal cord. The axon divides into terminal buttons, tiny structures at the terminal point. These buttons can communicate with other neurons, glands, and muscles.

Thus, there are three major processes in neural activity. 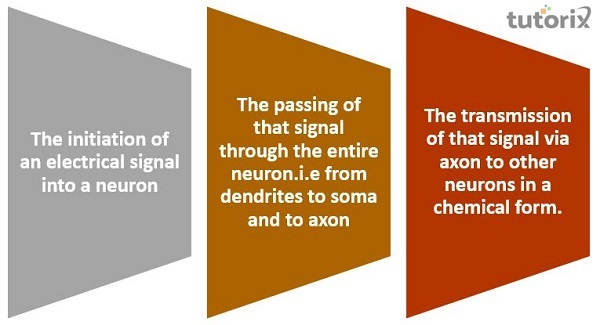 The Action Potential—All or None Principle

In the nervous system, information moves in the form of "nerve impulses." When our sensory organs come in contact with a stimulus, the sensory receptors are activated. Electrical changes in those receptors' nerve potential start. A neuron can receive excitatory or inhibitory signals at its receptors in the dendrites. These signals can come from other neurons or external stimuli. The excitatory signals are the "turn on" signals, which tell a neuron to pass this signal forward. An inhibitory signal, on the other hand, instructs the neuron not to transmit the signal and thus can be called the "turn off" signal.

All of these signals are gathered and added by the neuron. The neuron fires and produces an action potential if there are enough excitatory impulses, and the neuron does not fire at all if there are not enough impulses. The power of the stimulus that initiated the nerve impulse has little bearing on the strength of the impulse itself, according to the "all or none principle," which states that they either respond fully or not at all nerve fibers function.

Numerous neurons participate in the procedure while the impulse is sent to a far−off body area. One neuron reliably transmits the information to a nearby neuron during this procedure. A previous neuron's axon tip synapses or forms functional connections with its neighboring neuron's dendrites.

Several such neural pathways are activated to produce a behavior, and the nervous system functions well−coordinatedly to fulfill the body's demands. In addition, various parts of the brain are specialized to carry out other complex behaviors unique to humans, such as language. The brain has many structures, each contributing toward the production of behaviors.

The brain and behavior are intricately linked and interconnected. The brain gets information and influences from the inside and outside that allow the best behaviors to be activated at any time. Several studies of brain−injured individuals further confirm the interrelation between the brain and behavior, and this further strengthens our understanding that specific brain regions are responsible for certain behaviors.