Personality is an important trait that helps to understand people better. It helps one to know how a person might react and behave in a certain situation or a given set of circumstances. People have different personalities because their experiences differ, and their thoughts and reactions to those experiences are also distinct. Some people may act one way in one situation but behave differently in another because they have different personalities. One important aspect of the behavioral approach to personality is its definition of behavior and personality.

What Is the Behavioral Approach and Why It Matters?

Understanding the behavioral approach to personality is paramount if one wants to come to understand people better and build stronger relationships with them. Behavior is the actions one takes and how one responds to things. Personality further indicates one's thought process, how one feel and behave, and their trait. Personality cannot be defined in a definite way, and it is always evolving and subjective. It is affected by many factors, such as the experiences one has and the people one interacts with. On the other hand, behavior is much easier to point out and understand since it is much more concrete. For example, one could see someone yelling at someone else and know that the yelling is their behavior. However, personality is much more difficult to grasp because it is such a very complex and broad term.

Behavioral approaches to personality are a way of understanding personality that focuses on the traits, behaviors, and patterns a person displays on different situations. This approach has been evolved during early 20th century, when psychologists first began to study behavior and personality.

In the past, psychologists have used a variety of approaches to study personality, including psychoanalysis and behaviorism. Today, however, behavioral psychology is still one of the most popular ways to understand human behavior.

An important part of behavioral psychology is learning how and why one behaves as one does. This can be done through observation and experimentation with animals and humans. The observed behaviors are then categorized as instinctive responses or learned behaviors based on experience or experience with other people. The theory behind behavioral approaches is that a person's personality comprises behaviors they have learned over time, and those behaviors impact their thoughts and feelings. This means that certain things influence one's behavior; for example, if one is shy, they may avoid social situations because they make them uncomfortable. If one knows what makes a person shy or outgoing, they can use this knowledge to help them make better life choices, whether choosing not to go out alone at night or being more assertive when talking with others.

"The behavioral approach is based on the concept of explaining behavior through observation, and the belief that one's environment is what causes them to behave differently," also called Behaviorism (J.B.Watson 1924). It is a psychological approach to human behavior that aims to understand and predict people's actions by examining the environment and conditioning. It is a theory that looks at the relationship between an individual and the environment in which they live. The environment directly impacts human behavior, and it conditions the person to act in a certain way. The behaviorism theory considers the environment the major player in shaping the personality. This theory focuses on the learning process and the factors that affect it. It also examines the connections between the stimuli, the responses, and the reinforcements. There are two types of conditions:

In classical conditioning, a person associates a particular stimulus with a reaction, becoming a conditioned response that can occur without the stimulus. For example, Pavlov's experiment shows how conditioning happens. A neutral stimulus paired with unconditional stimuli over time produced a conditioned response, i.e., the bell (NS) paired with the food (US) produced saliva (UCR) in the dog, and over time, the ringing of the bell (NS) alone produced the saliva in the dog’s mouth (CR). 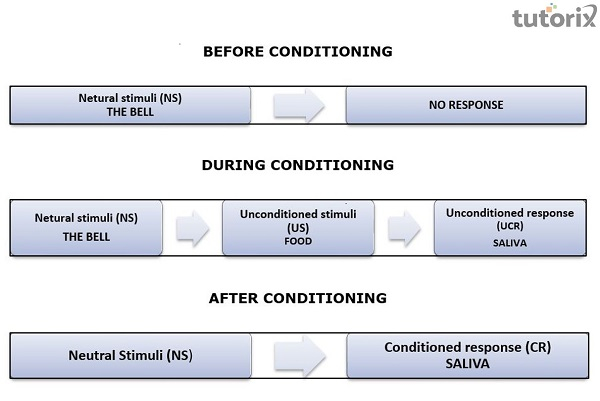 Based on this theory, in 1972, Martin Seligman noted that humans also learn similarly and develop specific traits and personalities through conditioning. For instance, a person who has in the past experienced sickness after they ate a specific food developed an aversion to those tastes. When paired with repeated unconditional stimuli, any stimuli that initially do not show any immediate reaction starts to show a conditioned response.

In operant conditioning, a person's behavior is shaped by positive or negative consequences. This theory looks at the relationship between a person and the environment in which they live. The environment provides the stimuli for the person and their reactions to those stimuli. The stimuli include anything that can be seen, heard, smelled, tasted, or felt. A person's personality can be shaped through reinforcements and punishments. Skinner believed that reinforcements were an important factor for motivation. Skinner also believed that many superstitious beliefs result from this type of conditioning. Another example of this operating condition is when a teacher rewards a student for completing an assignment on time, and the student will be motivated to complete assignments on time. The relationship between the person and the environment is the key to understanding how the person's personality develops. 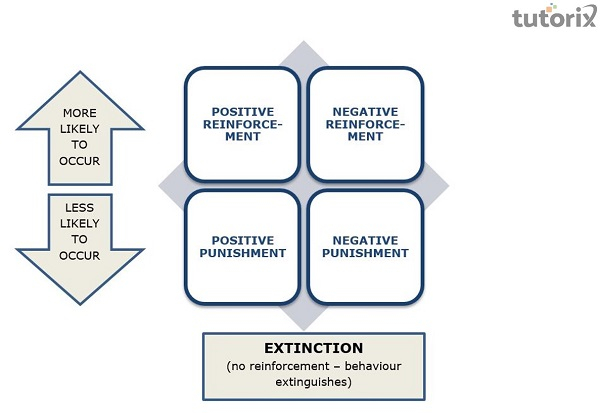 The study of personality, and individual differences, is a central part of psychology. Behavioral approaches to personality are based on the idea that people's behavior is determined by their thoughts, feelings, and actions. This behavior can be learned and can change over time. In conclusion, the behavioral approach to personality is one of psychology's most important new developments. It fasciliated one to understand people's behavior.