Normally, a depressive episode makes you feel hopeless, but this one makes you feel high. However, there are some temperamental characteristics present in those with atypical depression, including the propensity to expect failure, ruminating with high anticipatory worry, difficulty getting over humiliation and embarrassment, giving up easily out of frustration, great sensitivity to criticism, underachievement (poor persistence), and propensity to talk about feelings and experiences (high attachment). 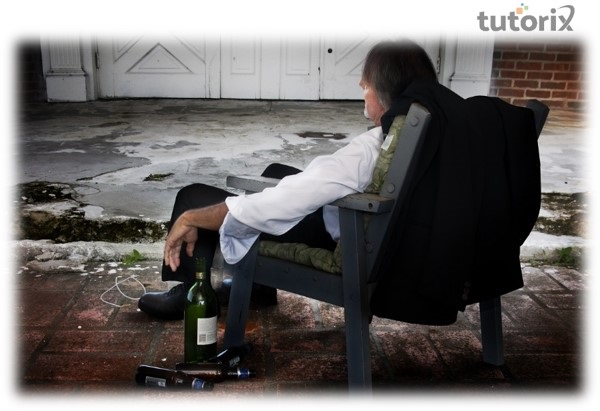 Depression is characterized by extreme sadness and despair. While feeling sad is a natural feeling, severe depression is not. Nobody has pinpointed the precise moment when "feeling down or blue" turns into depression. Depression is a mood or a clinical illness that combines symptoms of the emotional, cognitive, and behavioral forms.

What is Atypical Depression?

In 1959, West and Dally offered the first definition of A.D. as a preferential monoamine oxidase inhibitor (MAOI)−responsive depression. Before that, in 1948, the term "atypical depression" was used to refer to depressed individuals who also displayed agitation, paranoid characteristics, and bewilderment and responded favorably to electroconvulsive therapy (ECT). The DSM−III adopted the term to describe depression. Two forms of A.D. were proposed by Davidson et al. in 1982: type A, characterized by a predominance of anxiety symptoms, and type V, characterized by vegetative symptoms such as hyperphagia, weight gain, excessive sleeping, and increased sexual urge. Both categories shared traits such as early onset, female dominance, outpatient dominance, mildness, and a modest suicide attempt rate. The DSM−IV included the "atypical features" criteria as a specifier for major depression and dysthymia in 1994.

Reactivity to mood, i.e., the mood brightens in response to actual or potential positive events (e.g., a visit from children and compliments from others). If the external conditions remain positive, the mood may become euthymic (not depressed) even for prolonged durations. Two (or more) of the traits must be present −

The criteria for "with melancholic features" or "with catatonia" should not meet during the same episode. 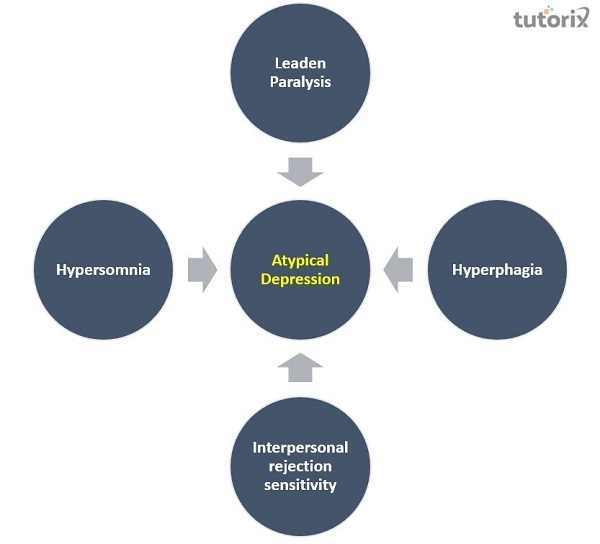 How is Atypical Depression different from Major Depression?

How is Atypical Depression different from Melancholic Depression?

In Atypical Depression, Leaden Paralysis is present, while in Melancholic Depression, psychomotor agitation or retardation is present. People with A.D. experiences excessive sleep while those with M.D. experience a lack of sleep.

Despite multiple pharmacological trials, there are currently no detailed treatment recommendations for A.D. A combination of psychotherapy and medications is the cornerstone of treatment for atypical depression. Psychotherapy can assist someone in processing their feelings, feeling less alone, and creating coping mechanisms for depressing thoughts. Medications used to treat A.D. include antidepressants, mood stabilizers, and antipsychotics. The first class of antidepressant drugs, known as monoamine oxidase inhibitors (MAOIs), were created in the 1950s and work by preventing the function of monoamine oxidase. This enzyme breaks down norepinephrine and serotonin after they have been produced. The MAOIs have the same potential for treating depression as other drugs. However, they have potentially harmful (even deadly) effects if specific foods high in the amino acid tyramine are taken. As a result, they are rarely used today to treat other types of depression until other types of treatment have failed. The only subtype of depression that appears to react preferentially to MAOIs is depression with atypical features.

Typically, the word "atypical" refers to something rare. Atypical depression, while distinct in its appearance, is most definitely not rare among depressive disorders. Atypical depression's status is challenging regardless of whether it is a disorder or a collection of symptoms. If there are multiple types of depression and at least one typical manifestation (e.g., melancholia), atypical depression may reflect diverse residual conditions.