Assessment of Personality by Carl Jung

Learning concepts entails following up with a test or analysis to see what has been learned or what could be learned. In the end, there is always an essence of understanding. This might resonate with how we always have to give exams at the end of each term in school or each semester in college. While assessing psychological attributes may not be so easily put, it more or less runs in the same vein.

When talking about personality, Jung formulated certain key techniques to assess the functioning of the psyche. These ideas are a culmination of science and the supernatural, thus leaving us with something that can be characterized as "an objective and a mystical approach." He divulged into various cultures, eras, religions, rituals, symbols, and myths in the hope of drawing from their ideas. His theory rests its tenets on his and his patient's dreams and fantasies, his explorations of ancient languages, alchemy, and even astrology. He expanded his scope beyond just the reals of psychology and into anthropology, sociology, mythology, philosophy, physics, and much more. This stemmed from his belief that the study of personality could not be caged into one particular discipline and that the whole person is to be understood by pursuing knowledge wherever it existed. However, he was often found defending himself as a purely scientific investigator and abstaining from the labels of mystic and philosopher. 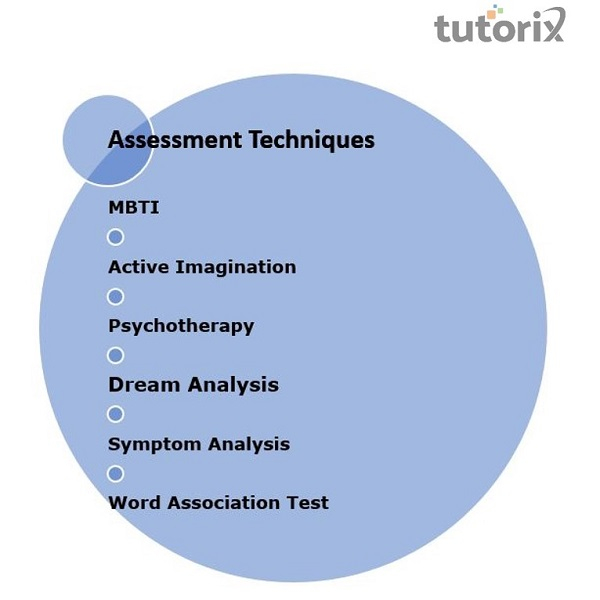 Although not the first person to use this method, Jung can be accredited with helping with the development and refinement process. His original usage of the technique can be dated back to 1903, when he had just started as a young psychiatric assistant but later in his career, he seldom used it. The original purpose of using it was to bespeak the validity of Freud's hypothesis that the unconscious operated as a self-governing process. From that, it has moved on to denude feeling-toned complexes.

The test is based on the principle that complexes create measurable emotional responses. Here, the subject is supposed to respond to a stimulus word with whatever word that first pops up in their mind. The verbal response, the time taken to make the response, and the physiological reactions (rate of breathing and galvanic skin response) were recorded to measure the emotional effects caused by the stimulus word. A host of factors like physiological responses (clearing throat, coughing, excessive body movement, restricted breathing, etc.), making up words, delayed responding, slips of the tongue, same responses to different stimulus words, etc., reflected the presence of a complex.

Based on Freud's cathartic method, symptom analysis posits light on the symptoms outlined by the patient and attempts to interpret the patient's free associations to those symptoms.

Agreeing with Freud's interpretation that dreams are the 'royal road' to the unconscious, Jung differed in that he was not concerned with uncovering the causes but believed that it was more than just an unconscious desire. Dreams, to him, were both 'perspective' (preparing us for experiences in anticipation) and 'compensatory' (helping bring about a balance between opposites in the psyche). Hoping to uncover repetitive themes, issues, and problems that recurred in the patient's unconscious, Jung analysed a series of dreams documented by the patient over time. He used amplification to analyse dreams – focused on the primary element of dreams, and asked the patient to draw repetitive connections and responses until a theme detection was achieved.

The purpose lies in discovering elements from both the personal and collective unconscious and conjoining them into the consciousness to expedite the process of self-realization. If there is a lack of expression or incompleteness in the waking-conscious life, the unconscious will strive to achieve wholeness in the dream world. Jung felt that certain dreams indict proof of the existence of the collective conscious, which included −

An assessment instrument developed by Katherine Cook Briggs and Isabel Briggs Myers in the 1920s is one of the most popular and frequently used personality tests ever devised. The purpose was to create something that made Jung's theory more accessible and comprehensible for the common people. The instrument is based on Jung's ideas about perception and judgment and the attitudes in which these are used in different types of people.

The aim is to associate, from self-report of easily recognized reactions, the basic preferences of people regarding perception and judgment, so that the effects of each preference, singly and in combination, can be established by research and put into practical use. The MBTI instrument contains four separate indices, each reflecting one of four basic preferences, which, as described by Jung, direct the use of perception and judgment.

Used for his self-analysis, this method requires a person to start with an initial impression which could be a fantasy, dream, vision, etc., and concentrate on it until it begins to 'move.' These images must be followed wherever it goes and then valorously face them to engage in free communication. The purpose is to reveal archetypal images that emerge from within the unconscious. Jung believed that it had the leverage of being produced in the waking state by the conscious and hence was more vivid and reproducible than dreams. Moreover, the feeling tone is also starkly specific, so individuals experience little to no difficulty reproducing it or remembering how it felt.

Jung recognized four basic approaches to therapy. The process started with confessing a pathogenic secret, followed by an interpretation, explanation, and elucidation of the same, and then included educating the patients as social beings. The most cardinal suggestion by Jung is the fourth stage – transformation, wherein the therapist must first undergo psychotherapy to be transformed into a healthy human being to be better able to move patients towards individuation, wholeness, or self-realization. He also brought about the concept of countertransference, a term used to describe a therapist's feelings towards the patient. It can either be a boon or a bane, but it is indispensable to successful psychotherapy.

When talking about Jung, while it is inappropriate to coin it completely as a mystical approach to the study of personality, it cannot be completely disregarded as unfounded by scientific principles. The assessment techniques developed, if used adequately, will surely elucidate a proper understanding of an individual's personality and entail an explanation of concepts put forward by Carl Jung.