Where to Install MongoDB From?

How to Install MongoDB and Create a Database?

This is an all-level course in Building an MVC app with ASP.NET Core 3 Using MongoDB as a back-end database.  To start with, it handles the concept of a NoSQL database comparing it with the conventional relational databases (RDBMS). The course then proceeds with one of the most popular NoSQL databases, the MongoDB which is a document-based database for proceeding further with applications developed with the popular ASP.NET Core framework.  The course uses the latest ASP.NET Core 3 for the hands-on development work. It shows and teaches the creation of an ASP.NET Core 3 MVC application in-depth, from scratch. It covers all the critical concepts associated with an MVC (Model-View-Controller) application built with the ASP.NET Core framework.

The main highlights of the MVC application being the introduction of a data access layer using a repository pattern in keeping with Industry best practices.  It also uses async programming (as opposed to synchronous programming) which is at the core of the new web framework of ASP.NET Core that has been rewritten from the earlier popular ASP.NET framework.

ASP.NET Core 3 has just been released in the .NET Conference 2019 on September 23, 2019, so the course uses the latest cutting edge technology released by Microsoft for which the Microsoft developer community has been waiting for long! 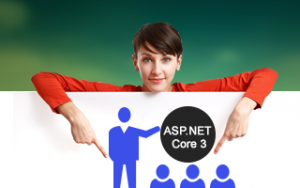