Application of Mean, Median, and Mode of Grouped Data in Psychology

Researchers use the three measures of central tendency in psychology to determine samples and the populations represented by the samples. A population can be defined as a whole group to be studied, and a sample can be defined as a part of that population. Mean, median, and mode are important in psychology since these measures can indicate scores. When conducting research, psychologists need to know what has the highest probability or, in other words, what will most likely happen. For example, a researcher who is seeking funds will want to know about the common diagnosis of a psychological service center as well as the problems which are faced most by the clients.

What is Mean of Grouped Data?

Mean − In psychology, the mean is the average value in a data set. Mean can be calculated by adding all the scores and dividing the total by the number of scores. Mean can predict the best score, the most popular among the other central tendencies. Mean can be influenced by outliers or extreme data points. The numbers in a data set that can be extremely higher or lower than other numbers in a set are called outliers, and it is distant from the others. So, the mean of a sample can get skewed if there is a presence of outliers. If this occurs, we have to use median or mode to solve the problem instead of mean.

Example − A researcher wants to find out the average test score of 6 students. the scores are 80%, 65%, 90%, 85%, 70% and 35%. adding the numbers equals 425. since there are six scores taken, the total of 425 divided by six yields a mean of 70.83%. The last score taken is 35% which is an outlier as it is an extremely low score compared to the others. So this outlier score determined where the mean could better depict what has happened to the data.

What is Median of Grouped Data?

Median − In psychology, the median can be defined as the middle of the numbers. It can be found by arranging the numbers in ascending order to determine the middle score. This middle score is known as the median. The outliers are known to skew the mean more than the median of a sample. How the median is calculated will be least affected by the outliers, so when there are outliers, medians are very useful for understanding how the central part of the data looks.

What is Mode of Grouped Data?

Mode − In psychology, a mode can be defined as the number that occurs the most in a given data set. It can be determined by arranging the numbers in ascending order and counting how many times each number occurs.

Calculation of Mean with Example

We can find out the arithmetic mean using the following formula. 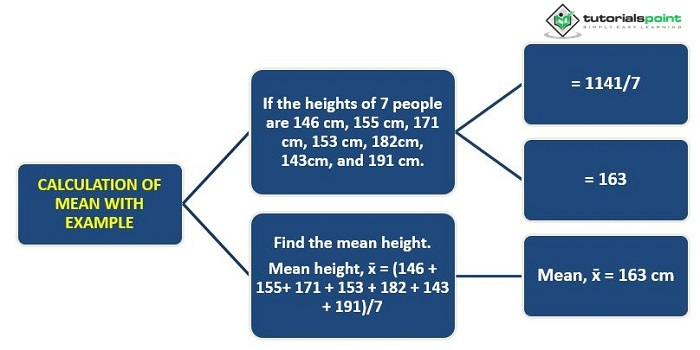 Calculation of Median with Example

In the case of grouped data,

The median can be found by using the following steps.

(Note − median class is the class where n/2 lies).

Step 2 − use the following formula to find the value of the median.

Calculation of Mode with Example

In the case of grouped data,

How to choose the central tendency method?

The researchers highly depend on the characteristics of the data set to determine which type of measures of the central tendency they have to choose. Mode is used only when the data set is very nominal, as there are no values to order for the median and no values to sum up for the mean. However, the median and mode can be used when the data set is ordinal, as frequency can be counted. Since the values cannot be added together, the mean cannot be calculated.

Moreover, with all the above information and examples, all three measures of central tendency, i.e., mean, median, and mode, are equally significant in psychology because every measure indicates a typical score. Alternatively, in other words, a psychologist can make an idea of the data collected through research and find out what is normal for a particular group.