The term "anti-social" is used to describe people who choose to be alone and resist spending a significant amount of time with those around them. However, "asocial" more accurately describes this lack of involvement in social activity. Asocial describes a general lack of interest in society and interaction with people, but it does not imply a person holds particular ill will or malicious intent against others. However, when a "personality disorder" term is added to the word "antisocial," it changes the whole meaning of it and becomes something different and more complex disorder. It extends beyond a general distaste or avoidance of community and society.

What is Antisocial Personality Disorder?

A psychopath is a term used to define people whose harmful actions toward other individuals tend to be a result of manipulation and cunningness. They act out empathy for others rather than feeling those emotions themselves. They are charismatic and charming. A psychopath is a severe form of antisocial personality disorder. Sociopaths, however, can form close connections with others but still violate social norms. They tend to be easily agitated and are more impulsive than people with psychopath traits.

Research suggests that about 1–4% of the general population fall under the umbrella of antisocial personality disorder in their lifetime. It has been found that males are 3 to 5 times more likely to be diagnosed with ASPD than females. The gender distribution includes 6% of men and 2% of women in the general population diagnosed with ASPD. Substance abuse is positively correlated, and education and intelligence negatively correlate with ASPD diagnosis.

Factors Contributing to the Cause

There is no single cause for ASPD, but factors such as the following may increase the risk of developing this disorder −

An anti-social personality disorder's diagnosis is based on psychological evaluation, which generally includes exploring an individual's feelings, thoughts, relationships, and behavior patterns along with a personal and family medical history of that individual and at least one symptom from the following pattern. These may be seen in an individual in a given period of 12 months −

Per the DSM 5 criteria, the diagnosis of antisocial personality disorder focuses on behaviors usually related to Criminal actions. Research shows concerns around this have been raised that sometimes diagnosis may be misinterpreted to individuals from low socioeconomic or urban settings in which Antisocial behavior may be a part of their protective living strategy; therefore, this disorder prevalence may have been overstated. 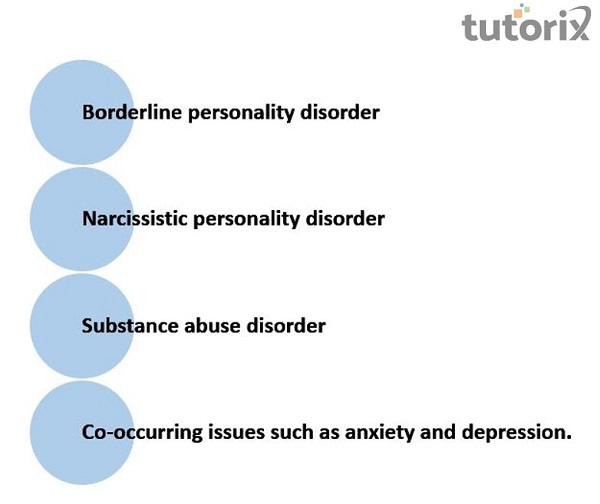 Treatment for antisocial personality disorder is difficult for several reasons. Namely, people rarely seek treatment on their own as they do not believe there is something wrong with them or others who receive treatment, only when they have legal action taken against them. In such conditions, individuals are not usually responsive to punishment. Therefore, it is best to have the right diagnosis at the right time.

Cognitive behavioral therapy has effectively changed maladaptive cognitive patterns into organized and healthy behaviors. It helps to gain insight into an individual's behavior and cognitive processes. Group therapy, family therapy, and mentalization-based therapy are also included in the treatment process.

Such as anti-anxiety medications, anti-depressants, antipsychotics, and mood stabilizers may be used and prescribed in the treatment course.

Individuals with antisocial personality disorder have a poor sense of morality and ethics. They are aggressive, impulsive, and involve themselves in high-risk activities, even criminal activities such as fraud or gambling. People with ASPD do not feel guilty or lack empathy for others. Treatment is aimed at reducing their impulsive and high-risk activities, along with a change in their actual behavior. This helps to increase their wellbeing and overall quality of life. It is critical to obtain the correct diagnosis as soon as possible in order to avoid any other complications associated with social personality disorder.