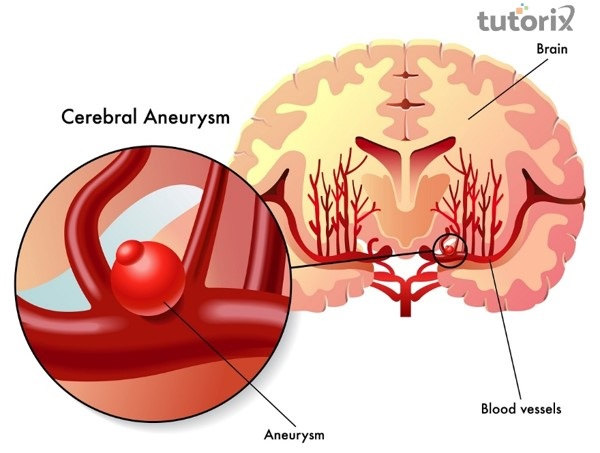 What is an Aneurysm?

Blood vessels frequently bulge when a weak spot develops in one of their parts. Whenever the ballooning or bulging is abnormally wide, it exceeds 50% of the vessel's normal width. Any blood vessel can be affected, but it happens most frequently in arteries. An aneurysm can develop in any organ or area of the body, including the brain, the aorta (the largest artery in the body that carries blood from the heart to the rest of the body), the neck, the intestines, the kidney, the spleen, and the legs. The most typical site for an aneurysm is the aorta. When a small section of a blood vessel in the brain becomes clogged with blood and balloons, it develops into a cerebral aneurysm. A hemorrhage occurs when blood spills into the surrounding tissue due to the pressure it puts on the nerves and tissue in the area. They can happen to anyone at any age but tend more frequently to adults, women, and anywhere in the brain.

There are numerous possible causes, even though the exact ones are not always obvious. The main blood vessels that supply blood to the brain must carry much blood up the neck. These blood vessels branch out into progressively smaller vessels, like a tree's trunk, which divides into branches and twigs. The points where the blood vessels divide and branch off are where most aneurysms form because these areas are frequently weaker. 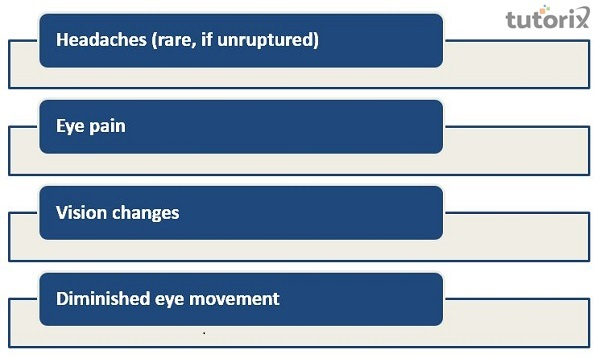 A larger, steadily growing aneurysm can also result in numbness, pain above and behind the eye, and paralysis on one side of the face. If an aneurysm is leaking (sentinel hemorrhage), it can cause some symptoms even before it ruptures. Some aneurysms can cause symptoms because they press on adjacent structures, such as nerves to the eye. They can cause symptoms like loss of vision, even in the case of an unruptured aneurysm.

The first evidence of a brain aneurysm is most often a subarachnoid hemorrhage (bleeding in the space between the brain and the surrounding membrane) due to a rupture of the aneurysm. This may cause symptoms such as −

For unrelated reasons, a brain aneurysm is often discovered after it has ruptured or accidentally during a diagnostic exam, like a CT scan or an MRI. Further diagnostic procedures may include a complete medical history and a physical exam, including scans like Cerebral angiography, CT scan, MRI, and MRA.

Most aneurysms develop when blood vessels diverge in the brain because these areas are frequently weaker. Blood aneurysms can occur for various reasons, and the precise cause is not always known. Many things can increase the risk of a person getting a brain aneurysm. They are −

Family History − When compared to someone with no family history of brain aneurysms, you are more likely to develop one if a close relative does, although this is extremely uncommon.

Age − The likelihood of developing a brain aneurysm rises, and most cases are identified in patients over 40.

Sex − A brain aneurysm is more common in women than men, which might be due to the changes to the hormone Oestrogen after menopause. Oestrogen is thought to help maintain the elasticity of the blood vessels, and its levels are lowered after menopause. 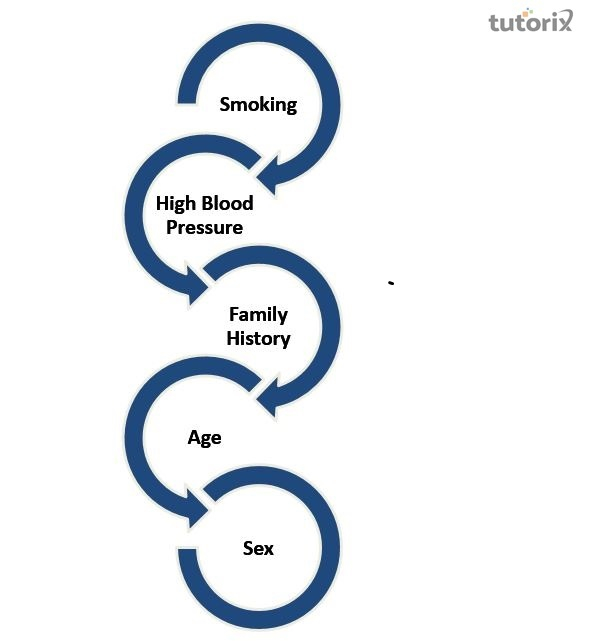 A person's prognosis for a ruptured cerebral aneurysm depends on its location, the amount of bleeding or rebleeding, age, general health, any existing neurological problems, and the amount of time that passed between the aneurysm's rupture and receiving medical assistance. Early detection and intervention are crucial.

Although small, unruptured aneurysms may not require treatment, they should be closely watched. Aneurysms that are large and have unusual shapes need to be treated. Emergency medical care is necessary for ruptured aneurysms to restore failing breathing, lower abnormally high pressure inside the brain, prevent them from rupturing again, and lower the chance of mortality.

A ruptured cerebral aneurysm may be fatal or result in hemorrhagic stroke, hydrocephalus, coma, short−term or long−term brain damage, and vasospasm (when other blood vessels in the brain constrict and restrict blood flow). It could take weeks or months to recover from treatment or a rupture. Controlling blood pressure, quitting smoking, and avoiding stimulant drugs are measures one can take to lower the risk of aneurysm rupture. About 25% of people with a ruptured cerebral aneurysm do not survive the first 24 hours. Treatment for unruptured and ruptured cerebral aneurysms includes surgery to clip or fill the aneurysm or to reduce its blood flow. Various medications may be prescribed to treat related symptoms or reduce stroke risk.

Depending on the location, size, and whether or not the aneurysm has ruptured, as well as the specific needs of the patient, brain aneurysms may be treated in one or more of the following ways −

Due to the decreased risk of recurrent bleeding and improved clinical results, patients with ruptured aneurysms may benefit from an emergency surgical clip application or endovascular coiling strategy.

Each year, brain aneurysms claim the lives of about 500,000 people. Often, a ruptured brain aneurysm is fatal and can cause lifelong brain damage in survivors. Finding out about them before they burst and receiving treatment is the best action. Additionally, individuals can alter their behaviors to lower their risk of initially getting an aneurysm.