An iron nail is kept in each of the following liquids. In which case would it lose its shine and appear dull?

Explanation: Soft drinks contain water, carbon dioxide and acid due to which iron nail is corroded and appears dull as rusting of iron nail occurs when the iron is exposed to air and moisture.

In order to prevent rusting of Iron, it is covered in grease or oil. The oil forms a protective layer and does not allow the iron to come in direct contact with air or moisture. Hence, the iron nail does not lose its shine when kept in mustard oil, coconut oil and kerosene.

[Extra information: Rust is an iron oxide, a usually reddish-brown oxide formed by the reaction of iron and oxygen. The terms "rust" and "rusting" only mean oxidation of iron and its resulting products. (so a new substance is formed as iron changes to iron ore.)

The nature of rust changes with time, reflecting the slow rates of the reactions of solids. (so the change is irreversible)

Rusting is an oxidation reaction. The iron reacts with water and oxygen to form hydrated iron(III) oxide, which we see as rust. On reversing the reaction, we don't get back the original substance. It is a permanent change. 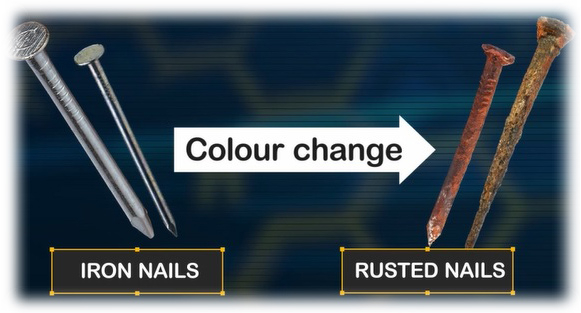