An archer stretches her bow while taking aim at the target. She then releases the arrow, which begins to move towards the target.

To fill in the blanks.

Let us discuss a little about the given situation before filling in the blank:

When the archer stretches the bow, she applies muscular force and the shape of the bow is changed after getting stretched and when the arrow is released, the arrow starts to move towards the target. The arrow comes into motion from the rest position. So, a contact force is responsible for this change of the motion of the arrow after getting released. Here two forces like air resistance and gravity act on the arrow to oppose its motion as shown in the figure below: 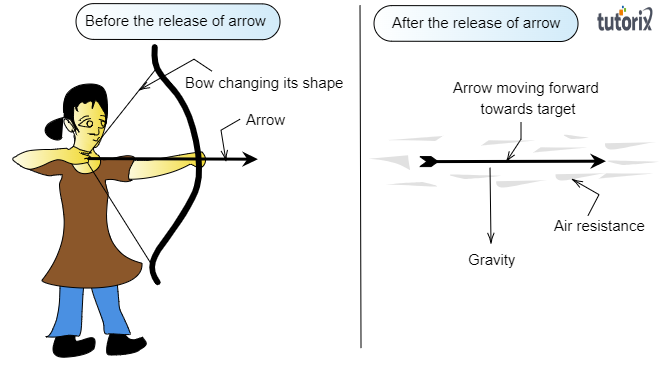 Based on the above discussion, let us fill in the blanks:

$(a)$. To stretch the bow, the archer applies a force that causes a change in its $\underline{shape}$.

$(b)$. The force applied by the archer to stretch the bow is an example of $\underline{muscular\ force}$ force.

$(c)$. The type of force responsible for a change in the state of motion of the arrow is an example of a $\underline{contact\ force}$ force.