The Web is moving so fast and it is always improving. New standards are created every day. Browsers allow updates to be installed without the user ever knowing, so you should keep up with what is going on in the world of the Web and WebRTC. Here is an overview of what this is up to today.

Every browser doesn't have all the same WebRTC features at the same time. Different browsers may be ahead of the curve, which makes some WebRTC features work in one browser and not another. The current support for WebRTC in the browser is shown in the following picture. 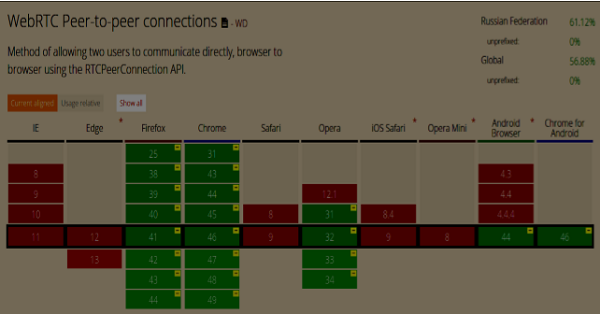 You can check an up-to-date WebRTC support status at http://caniuse.com/#feat=rtcpeerconnection.

The latest versions of Chrome, Firefox, and Opera on mainstream PC operating systems such as Mac OS X, Windows, and Linux, all support WebRTC out-of-the-box. And most importantly, the engineers from Chrome and Firefox developer teams have been working together to fix issues so these two browsers could communicate with each other easily.

On Android operating systems, WebRTC applications for Chrome and Firefox should work outof-the-box. They are able to work with other browsers after Android Ice Cream Sandwich version (4.0). This is due to the code sharing between desktop and mobile versions.

Apple has not yet made any announcement about their plans to support WebRTC in Safari on OS X. One of the possible workarounds for hybrid native iOS applications os to embed the WebRTC code directly into the application and load this app into a WebView.

Microsoft doesn't support WebRTC on desktops. But they have officially confirmed that they are going to implement ORTC (Object Realtime Communications) in future versions of IE(Edge). They are not planning to support WebRTC 1.0. They labeled their ORTC as WebRTC 1.1, although it is just a community enhancement and not the official standard. Recently they've added the ORTC support to the latest Microsoft Edge version. You may learn more at https://blogs.windows.com/msedgedev/2015/09/18/ortc-api-is-now-available-in-microsoftedge/.

Notice that WebRTC is a collection of APIs and protocols, not a single API. The support for each of these is developing on different browsers and operating systems at a different level. A great way to check the latest level of support is through http://canisue.com. It tracks adoption of modern APIs across multiple browsers. You can also find the latest information on browser supports as well as WebRTC demos at http://www.webrtc.org, which is supported by Mozilla, Google, and Opera.