The mobile station attempts to find a suitable cell by passing through the list in descending order of received signal strength, the first BCCH channel, which satisfies a set of requirements it has selected.

Call to an Active Mobile Station

As an active mobile station (MS) moves in the coverage area of a public land mobile network (PLMN), it reports its movements so that it can be located as needed, using the update procedure locations. When a mobile services switching center (MSC) in the network needs to establish a call to a mobile station operating in its flow area, following things occur −

If location never updates the implementation for location update, cost becomes zero. But we have to page every cell for locating the MS and this procedure will not be cost effective. 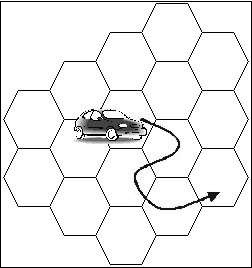 Location updates are taking place as per the requirements of the network, may be time or movement or distance based. This procedure involves high cost, but we have to page single cell or few cells only for locating the MS and this procedure will be cost effective. 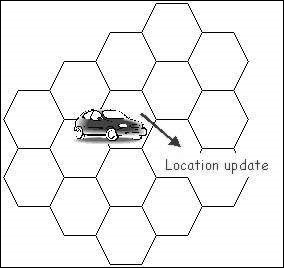 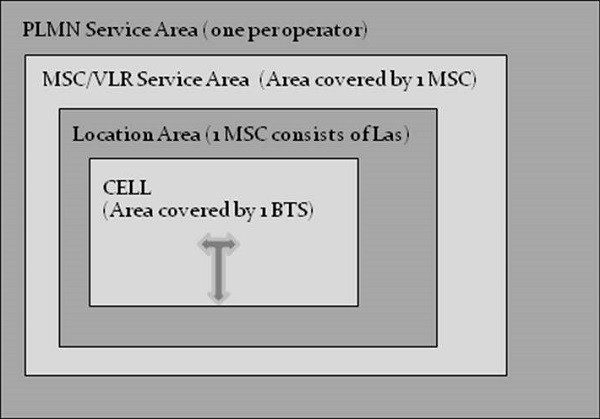 The configuration of a Public Land Mobile Network (PLMN) is designed so that active mobile station moving in the network area is still able to report its position. A network consists of different areas −

A PLMN area is the geographical area in which land mobile communication services are provided to the public by a particular PLMN operator. From any position within a PLMN area, the mobile user can set up calls to another user of the same network, or to a user of another network. The other network may be a fixed network, another GSM PLMN, or another type of PLMN. Users of the same PLMN or users of other networks can also call a mobile user who is active in the PLMN area. When there are several PLMN operators, the geographical areas covered by their networks may overlap. The extent of a PLMN area is normally limited by national borders.

To eliminate the need for network-wide paging broadcasts, the PLMN needs to know the approximate positions of the MSs that are active within its coverage area. To enable the approximate positions of any MS to be represented by a single parameter, the total area covered by the network is divided into location areas. A Location Area (LA) is a group of one or more radio cells. This group fulfills the following requirements −

Every radio transmitter in the PLMN broadcast, via a control channel BCCH, a Location Area Identity (LAI), code to identify the location area that it serves. When an MS is not engaged in a call, it automatically scans the BCCH transmitted by the base stations in the locality and selects the channel that is delivering the strongest signal. The LAI code broadcast by the selected channel identifies the location area in which the MS is currently situated. This LAI code is stored in the Subscriber Identity Module (SIM) of the mobile equipment.

As the MS moves through the network area, the signal received from the selected control channel gradually diminishes in strength until it is no longer the strongest. At this point the MS re-tunes to the channel that has become dominant and examines the LAI code that it is broadcasting. If the received LAI code differs from that stored on the SIM, then the MS has entered another location area and initiates a location update procedure to report the change to the MSC. At the end of the procedure, the LAI code in the SIM is also updated.

It is a Location Area Identity (LAI) code to identify the location area in a PLMN. The LAI code has three components −

The MCC is a 3-digit code that uniquely identifies the country of domicile of the mobile subscriber (for example, India 404). It is assigned by the ITU-T.

The MNC is a 2-digit code (3-digit code for GSM-1900) that identifies the home GSM PLMN of the mobile subscriber. If more than one GSM PLMN exists in a country, a unique MNC is assigned to each of them. It is assigned by the government of each country. (For example Cell one, Chennai 64).

The LAC component identifies a location area within a PLMN; it has a fixed length of 2 octets and can be coded using hexadecimal representation. It is assigned by an operator.

A VLR area is region of the network that is supervised by a single Visitor Location Register (VLR). In theory, a VLR area may consist of one more MSC areas. In practice, however the functions of the VLR are always integrated with those of the MSC so that the terms "VLR area" and "MSC area" have become synonymous.

A VLR contains a data record for each of the MS that are currently operating in its area. Each record contains a set of subscriber identity codes, related subscription information, and a Location Area Identity (LAI) code. This information is used by the MSC when handling calls to or from an MS in the area. When an MS moves from one area to another, the responsibility for its supervision passes from one VLR to another. A new data record is created by the VLR that has adopted the MS, and the old record is deleted. Provided that aninter-working agreement exists between the network operators concerned, data transaction can cross both network and national boundaries.

The HLR contains information relevant to mobile subscribers who are fee-paying customers of the organization that operates the PLMN.

The subscription information includes the IMSI and directory number allocated to the subscriber, the type of services provided and any related restrictions.

The location information enables incoming calls to be routed to the MS. The absence of this information indicates that the MS is inactive and cannot be reached.

When an MS moves from one VLR area to another, the location information in the HLR is updated with the new entry for the MS, using subscription data copied from the HLR. Provided that an inter-working agreement exists between the network operators, concerned data transactions can move across both network and national boundaries.

Each number is stored in the HLR and/or VLR.

The composition of the MSISDN is such that it can be used as a global title address in the Signaling Connection Control Part (SCCP) for routing message to the HLR of the mobile subscriber.

The MSRN is the number required by the gateway MSC to route an incoming call to an MS that is not currently under the control of the gateway MSISDN. Using a mobile, terminated call is routed to the MSC gateway. Based on this, MSISDN gateway MSC requests for a MSRN to route the call to the current visited MSC International Mobile Subscriber Identity (IMSI).

An MS is identified by its IMSI. The IMSI is embedded in the SIM of the mobile equipment. It is provided by the MS anytime it accesses the network.

The MCC component of the IMSI is a 3-digit code that uniquely identifies the country of the domicile of the subscriber. It is assigned by the ITU-T.

The MNC component is a 2-digit code that identifies the home GSM PLMN of the mobile subscriber. It is assigned by the government of each country. For GSM-1900 a 3-digit MNC is used.

The MSIN is a code that identifies the subscriber within a GSM PLMN. It is assigned by the operator.

The TMSI is an identity alias which is used instead of the IMSI when possible. The use of a TMSI ensures that the true identity of the mobile subscriber remains confidential by eliminating the need to transfer a non ciphered IMSI code over a radio link.

A VLR allocates a unique TMSI code to each mobile subscriber that is operating in its area. This code which is only valid within the area supervised by the VLR is used to identify the subscriber, in messages to and from the MS. When a change of location area also involves a change of VLR area, a new TMSI code is allocated and communicated to the MS. The MS stores the TMSI on its SIM. The TMSI consists of four octets. 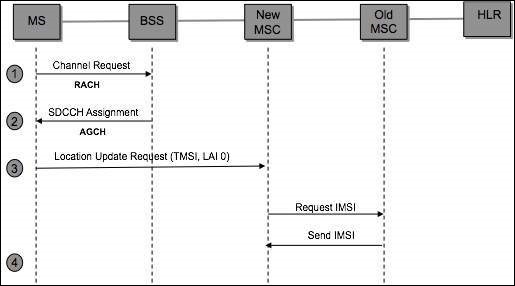 The MS enters a new cell area, listens to the Location Area Identity (LAI) being transmitted on the broadcast channel (BCCH), and compares this LAI with the last LAI (stored in the SIM) representing the last area where the mobile was registered. 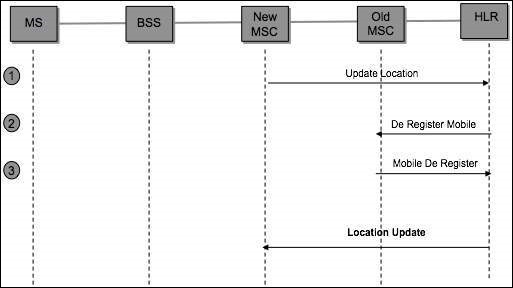 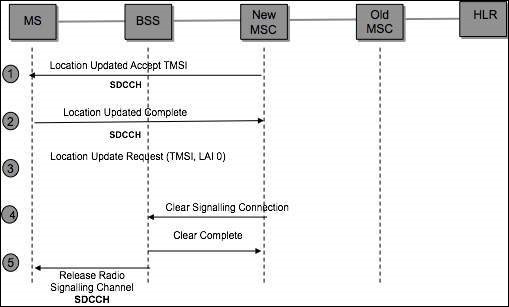 Location Update automatically takes place when the MS changes its LA. A lot of location updates may be generated if a user crosses LA boundary frequently. If the MS remains in the same LA, Location Update may take place based on time/movement/distance, as defined by the network provider.

This is the process of automatically switching a call in progress from one traffic channel to another to neutralize the adverse effects of the user movements. Hand over process will be started only if the power control is not helpful anymore. 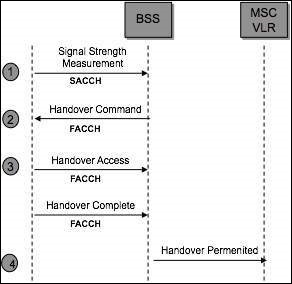 There are two types of Hand Over −

The objectives of Hand Over are as follows −

When will a Hand Over take place?