Twitter provides a wide range of useful features, which can be used for business marketing. In this chapter you get to understand purpose of creating multiple Twitter accounts for business, pinning on Twitter, posting links through the tweets, and the URL shorteners.

A best practice for Twitter as a brand is maintaining one go-to Twitter account. However, some brands may need to create multiple Twitter accounts to address several geographical locations, hone in on certain business channels/departments, tweeting only to employees versus consumer.

When managing multiple Twitter accounts, we recommend using Hootsuite to post and monitor Twitter activity. This free web based product lets you schedule your Twitter posts ahead of time or Tweet live (attach a URL and a photo as well), monitor the stream of those you are following, as well as monitor specific hashtags, keywords, and handles.

When you refresh the page, your pinned Tweet should appear at the top, above your most recent Tweets. 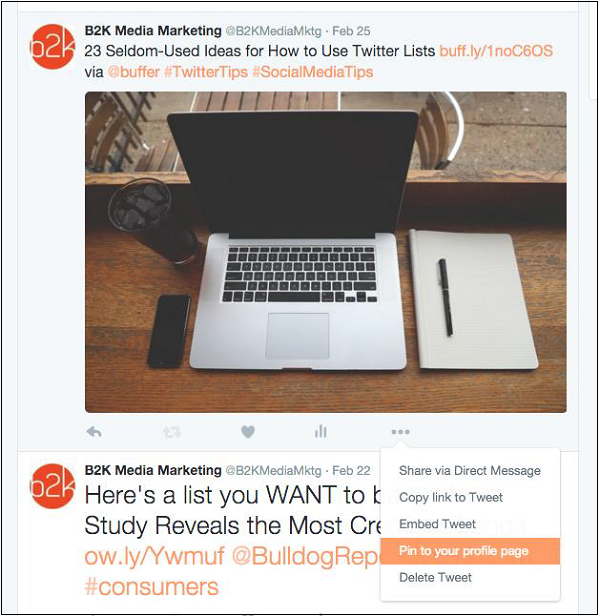 Links shared on Twitter, including links shared in Direct Messages, will automatically be processed and shortened to an http://t.co link.

Shortened links allow you to share long URLs in a Tweet while maintaining the maximum number of characters for your message. By creating this unique link for twitter, you can measures information such as how many times a link has been clicked, an important quality signal in determining how relevant and interesting each Tweet is when compared to similar Tweets.

Unless using a third-party, all URL’s will be shortened as a t.co link. You cannot opt out of link shortening.

Tweeting a Link on Internet

A URL of any length will be altered to 23 characters, even if the link itself is less than 23 characters long. Your character count reflects this. Click on Tweet button to post your Tweet and link.

Tweeting a Link from a Mobile Device

Other popular link shorterner services include bit.ly and Google’s URL Shortener. There are also several services that allow you to create your own customizable shortened URLs which incorporate your branding.