You can use the query panel to create or preview queries on a Business Layer or on top of Universe published in the repository. The query panel allows you to add objects in the query and to preview the query results. A query panel can be opened using the following methods −

To select the objects that you want to include in the query, drag objects from the business layer on the right into the Result Objects pane.

For hierarchy result objects, select members to include or exclude in the results. To open the MemberSelector, click the arrow to the right of the hierarchy object name

To filter the results of the query, drag objects from the business layer into the Filter Objects pane. 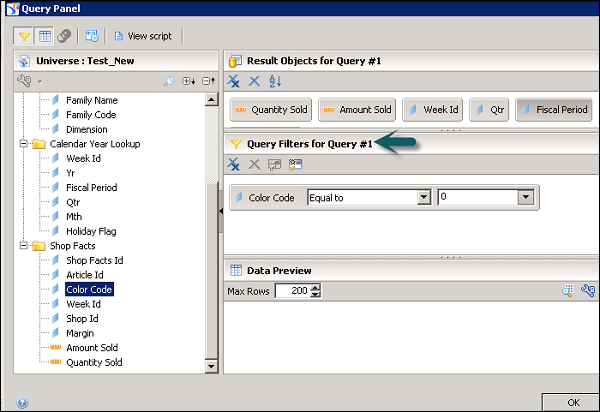 Named set are defined in Business layer while creating Universe. To select members by named set, your hierarchy should define minimum one named set.

Named sets are displayed when you click on metadata under the member selector. If you can’t find a named set folder under metadata, it means the hierarchy has no named set.

You can also use calculated measures with hierarchy but hierarchy should have minimum one metadata defined. They are defined in Business layer.