Here, statement(s) may be a single statement or a block of statements. The condition may be any expression, and true is any non-zero value. The loop iterates while the condition is true. 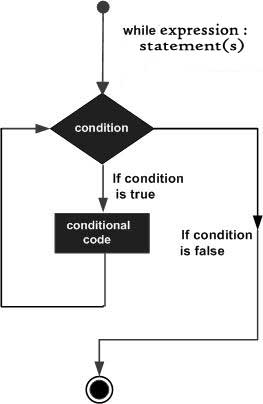 Here, key point of the while loop is that the loop might not ever run. When the condition is tested and the result is false, the loop body will be skipped and the first statement after the while loop will be executed.

Above example goes in an infinite loop and you need to use CTRL+C to exit the program.

Using else Statement with While Loop

Python supports to have an else statement associated with a loop statement.

The following example illustrates the combination of an else statement with a while statement that prints a number as long as it is less than 5, otherwise else statement gets executed.

It is better not try above example because it goes into infinite loop and you need to press CTRL+C keys to exit.