Generally, Java developers use lots of code, or use the proprietary framework to interact with the database, whereas using JPA, the burden of interacting with the database reduces significantly. It forms a bridge between object models (Java program) and relational models (database program).

Mismatches between relational and object models

Java Persistence API is a collection of classes and methods to persistently store the vast amounts of data into a database which is provided by the Oracle Corporation.

Where to use JPA?

To reduce the burden of writing codes for relational object management, a programmer follows the ‘JPA Provider’ framework, which allows easy interaction with database instance. Here the required framework is taken over by JPA. 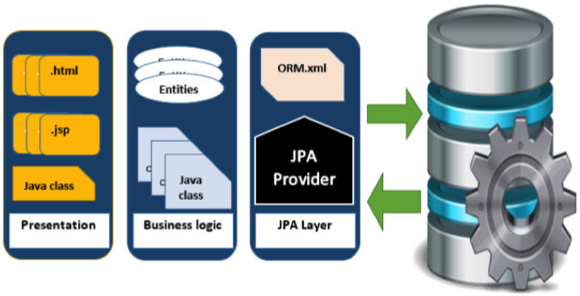 JPA is an open source API, therefore various enterprise vendors such as Oracle, Redhat, Eclipse, etc. provide new products by adding the JPA persistence flavor in them. Some of these products include: