Using JOGL programming, it is possible to draw various graphical shapes such as straight lines, triangles, 3D shapes including special effects such as rotation, lighting, colors, etc. To draw objects in JOGL first of all we have to construct a basic JOGL frame. Below given are the classes required to construct a basic frame.

All the methods of GLEventListener require object of GLAutoDrawable interface as a parameter.

This interface supplies an event-based mechanism (GLEventListener) for performing OpenGL rendering. GLAutoDrawable automatically creates a primary rendering context which is associated with GLAutoDrawable for the lifetime of the object.

Note − There are other methods in this package. Only a few important methods pertaining to template are discussed in this interface.

GLCanvas and GLJpanel are the two main classes of JOGL GUI that implement GLAutoDrawable interface, which can be utilized as drawing surfaces for OpenGL commands.

GLCanvas is a heavyweight AWT component which provides OpenGL rendering support. This is the primary implementation of an AWTAutoGLDrawable interface. It also inherits java.awt.Canvas class. Since it is a heavyweight component, in certain cases, GLJCanvas may not integrate with swing component correctly. Therefore, care must be taken while using it with Swing. Whenever you face problems with GLJCanvas, then you must use GLJPanel class.

The hierarchical diagram of class GLCanvas can be as shown below −

Below given are the constructors required to instantiate GLCanvas class.

Below given are the methods used for event handling of GLCanvas class.

To instantiate GLCanvas class, you need the object of GLCapabilitiesImmutable interface, which specifies an immutable set of OpenGL capabilities.

Below given is a constructor to instantiate GLCapabilities class

To instantiate GLCanvas class, you need an object of GLCapabilitiesImmutable interface, which specifies an immutable set of OpenGL capabilities.

Since several versions of OpenGL API were released; you need to specify the exact version of OpenGL API being used in your program to your Java Virtual Machine (JVM). This is done using the GLProfile class.

The get() method of this class accepts different predefined String objects as parameters. Each String object is a name of an interface and each interface supports certain versions of OpenGL. If you initialize this class as static and singleton, it gives you singleton GLProfile objects for each available JOGL profile.

Below given is the prototype of the get method of GLProfile class.

As this is a static method, you need to invoke it using the class name, and it requires a predefined static string variable as parameter. There are 12 such variables in this class, each represents an individual implementation of GL interface.

Parameters of get() method

It is a lightweight Swing component which provides OpenGL rendering support. It is provided for compatibility with Swing.

Below given is diagram represents the class hierarchey of GLJPanel class. 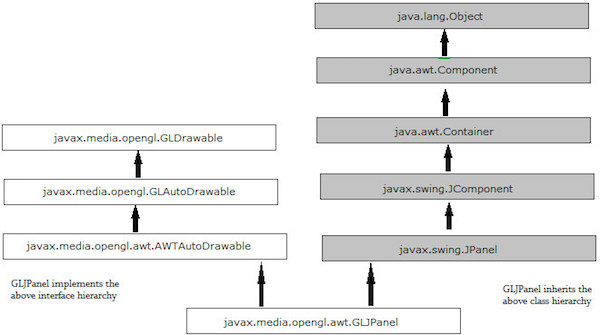 Below given are various constructors GLJPanel class.

Below given are the methods of GLJPanel class.